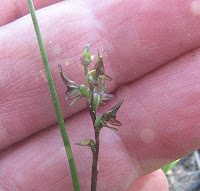 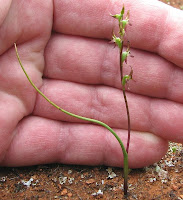 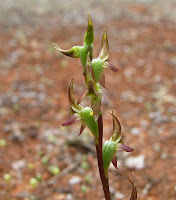 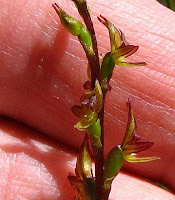 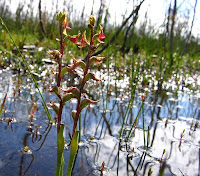 
Very similar to the Little Laughing Leek Orchid, Prasophyllum gracile and overlaps with it in the southern mallee and along the coast. However, whereas the latter has long and thinnish flowers (around 10 mm x 4-5 mm), the Laughing Leek's flowers are around 8 mm x 6 mm, so shorter and more plump. The flowers also tend to be more widely spaced along the stem, plus the points on the lateral sepals are shorter and thicker. The other main difference is the flowering period, which is much later for the Laughing Leek and runs from September to January, whereas the Little Laughing Leek flowers earlier from July to October.

A reasonably common orchid, but due to its non-descript coloration and small size, it is commonly overlooked. Main habitat is around winter-wet swamps and in shallowish soil over granite. It does not usually extend far inland, preferring the higher rainfall areas closer to the coast, although it is well represented in suitable habitat in southern (ex mallee) wheatbelt regions.

Posted by William Archer at 4:05 PM