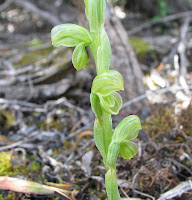 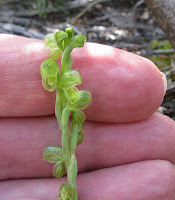 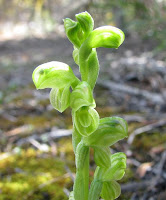 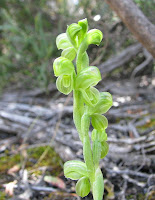 
In the Esperance region this orchid is mainly confined to the mallee region and often around granite outcrops. It is widespread, inasmuch you are often tripping over them, but I would not say they are particularly common, or at least not in large numbers, more like scattered plants in loose colonies.


The common name of Midget Greenhood does not refer to the plant size, which is commonly around 150 mm (6") in height, but to the flower that is reputed to be the smallest of all WA greenhood orchids. It is recorded as being around 5 mm (less than 1/4"), although if using my fingers as a scale (approx. 20 mm or 7/8" wide), some of the lower flowers would be closer to 10 mm or 3/8" long. Nevertheless, it would probably still hold the WA record.