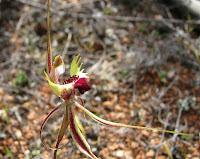 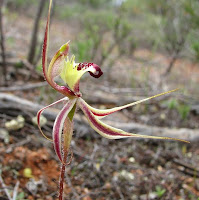 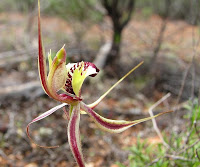 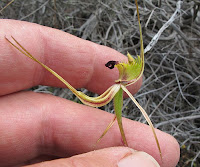 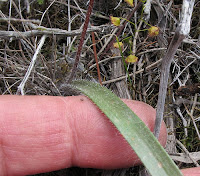 
Reported as being common and widespread, but I have not found it so to the NE of Esperance, which may just reflect me being in the wrong places at the right time. This one was encountered near shrubs in a shallow clay/sand soil over granite, where rainfall would drain on its way to the lower exposed rock and so keep the root zone reasonably moist. The Small Mantis Orchid is also found near watercourses and saltlakes.

Readily recognised by the green broadly toothed labellum, which is easily spotted against the red soil and grey leaf-litter of granite surrounds. Flowering time is recorded as August and September, but in the drier areas I would imagine this could vary a little depending on the region's low and irregular rainfall.

Update 3/10/10
Two photos added (leaf and profile), taken around the edge of a saltlake in a sandy loam over granite, to the SE of Mt Ridley (mallee region NE of Esperance). Scattered individuals facing east, mostly near the granite edge overlooking the playa lake during early October. Despite fresh flowers, the leaves had shrivelled on all but one, which was sheltered by taller vegetation. The leaf reverse was strongly mottled red/green over most of its length.