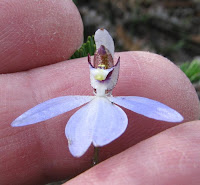 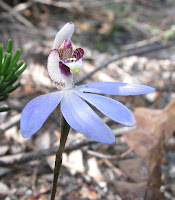 
A strange common name as the flower is far from being tiny. The ones seen have been a good 20 mm diameter (around 1") and are quite noticeable, however the orchid is not common in near coastal areas except maybe after a summer bushfire, although odd ones can still be found providing they are not overgrown by other vegetation. Initially the orchid appears leafless, but one can usually be found lying close to the ground.

The Western Tiny Blue Orchid occurs around granite outcrops and low-lying areas with sub-surface moisture, a habitat often highlighted by thickets of the attractive orange flowered Lambertia inermis. A number of other habitats are recorded, but I have not seen this orchid in them. The flowers vary from blue to pale blue and occasionally white, and bloom during August and September.