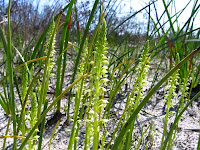 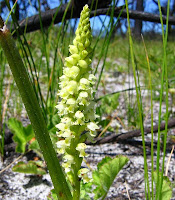 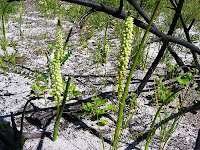 
A handsome tall onion orchid to 600 mm (2'), but although called the White Mignonette Orchid, it can also have cream or even green flowers. It usually only blooms after summer bushfires and has been noted in small scattered groups, growing in low-lying heath and on sandy rises around saltlakes. I have seen them in flower during October/November, but they are known to flower through to January.

The labellum is quite distinctive, being long and very broad (almost triangular) at the extremity, where it divides into two wavy edged lobes. Most of the labellum has a wide wavy frill that can be seen with the eye, making it quite different from other local Microtis species, so with a close look even the green flowered varieties should be easy to identify.