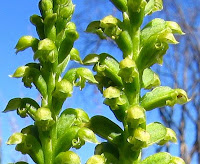 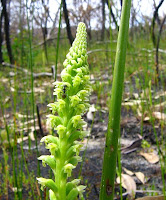 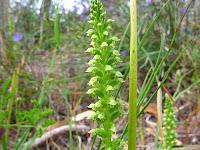 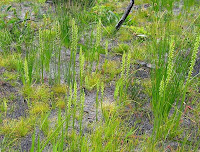 
A highly variable species with several subspecies. This one varies greatly in height from 200 mm (8") to over 600 mm (2') and like its name suggests is very common by occurring in most soil and habitat types, and from very sheltered to quite exposed locations. It is certainly more plentiful after a bushfire but still easily found without one.


This species can be distinguished from other onion orchids by the slender labellum that is usually bilobed at the end. The labellum is frilled but not strongly so, although may be slightly wavy with lateral lobes small to non-existent. Nevertheless, this orchid is still highly variable and entire colonies can be cloned from a single individual that may be an unusual form, simply by reproducing itself from root tubers.


Although largely dependent on the degree of shelter and soil moisture, the Common Mignonette Orchid can be found in bloom anytime from September to January.

Posted by William Archer at 4:14 PM