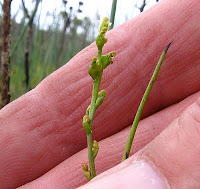 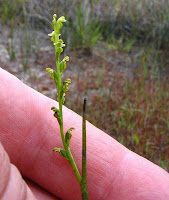 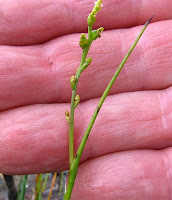 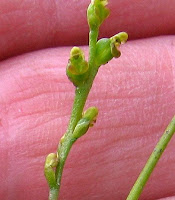 
A common widespread onion orchid, usually in scattered small colonies and growing to 350 mm (1' 2") but often smaller. It resembles the Sweet Mignonette Orchid, Microtis brownii, in that it has the flowers well spaced on the stem, however this orchid blooms much earlier and is usually finished before the other comes into flower.

The main distinguishing feature with this species is the round disk-like labellum and is the only Microtis to have one of this structure. So a very easy one to identify. It normally grows in low-lying areas around ephemeral swamps and does not need a fire to make it bloom. It has a long flowering period and can be found at anytime from August to November.