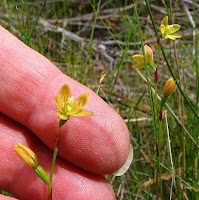 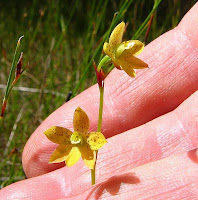 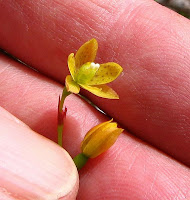 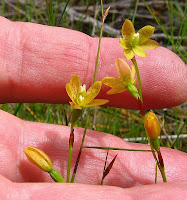 
I have only encountered a single colony of this orchid in the Esperance region and that is on a gentle slope just below Banksia heath (acid peaty/sand), on a lightly slashed track with sub-surface seepage. There are several dozen plants confined to a thirty metre (100 feet) section, but as this habitat type also occurs elsewhere, it is likely this orchid would also.


There has not been a bushfire in this area for a number of years, but the annual slashing would keep the habitat open and so reproducing at least that aspect of a fire. The habitat is dominated by a vertical, round stemmed sedge of similar dimensions to that of the Tiger Orchid, which means the orchid is largely invisible until it flowers. Fortunately for me these orchids flower reasonably freely, which apparently they don't in other regions in the SW of the State, so at least their flowers of around 10 mm diameter (3/8") and being bright yellow are reasonably obvious, but in more overgrown vegetation (presumably if they would still flower) they may not be.


The Tiger Orchid is a late flowering species, blooming from November to January, with most of my colony during the month of December.