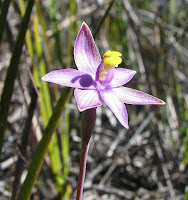 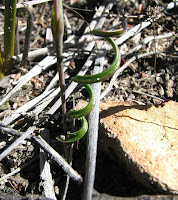 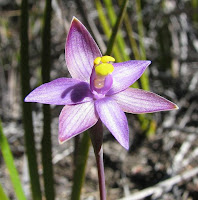 Previously placed with Thelymitra spiralis, but now separated into different species by Dr Jeanes, although formal recognition is still in manuscript form. This species however is detailed in the publication 'Orchids of Western Australia' by Andrew Brown et.al. Apparently it differs from T. spiralis by its smaller flowers (3 cm or little over 1" diameter), which have a 'deep blue-mauve coloration and prominent stripes.' Flowering during August and September.

The curly-locks name refers to the shape of the basal leaf that is curled like a spring. Not a common orchid in the Esperance region, but apparently widespread further west. I discovered the one above on a broken limestone slope where seepage flowed during wet periods, but it can also be found in other moist sites, preferring the heavier soils around granite outcrops and swampy winter wet zones.