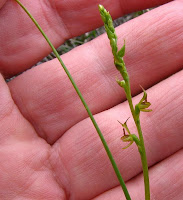 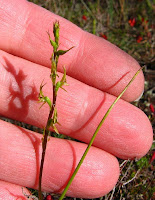 Previously known as Prasophyllum ringens, it is one of the smallest of the leek orchids being only to 150 mm (6") and often smaller. Very widespread, but nowhere noticeably common. It is the sort of plant you stumble upon. It prefers moist soils in low-lying drainage and seepage zones, or around granite outcrops.

Due to the long pointy tips of the lateral sepals and its small size, it is not likely to be confused with other species, although flower color can vary from green to dark red. It is more obvious after a bushfire (probably because it is less hidden), but it does not need one in order to flower.

It can flower from July to October, but August/September would be the best time to look for them.
Posted by William Archer at 5:37 PM