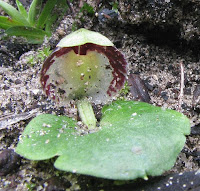 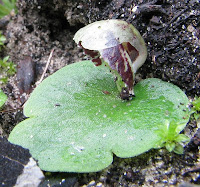 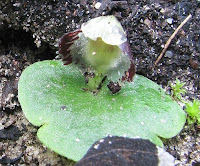 
Although reputed to be endangered, this orchid was in a very large colony of many hundreds, if not thousands of plants, with a good many in flower. They were growing on the south side at the base of a tall, steep, alkaline dune. There was considerable vegetation to 3 metres (10 feet) in front, the steep dune immediately behind and eucalypts branching overhead, so the colony would receive very little direct sunlight, but plenty of light as they were not overly crowded by other vegetation. The colony extended the length of the steep dune (around 50 metres) and was around two metres wide. Density was from scattered plants to being quite congested.

Compared to the Sandhill Helmet Orchid, C. despectans that also grows in the area (although not with this colony), this Crystal Helmet Orchid colony was far more extensive and congested. The leaves were much larger, being over 30 mm (11/4") in length, with the flowers also much larger (over 10 mm). The flowers were colored burgundy, rather than red with C. despectans. The most noticeable feature however was the large hood (dorsal sepal) that extended well over the labellum, which was a feature common to all flowers.

The flowering period for this orchid is August and September.

Posted by William Archer at 4:25 PM