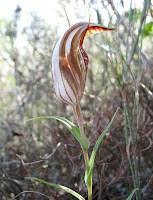 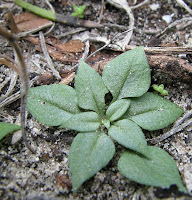 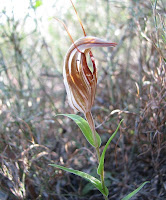 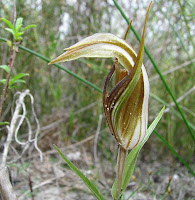 
This orchid although widespread in alkaline sands is often missed because it largely reproduces from tubers and does not need to flower regularly, other than to add to its gene pool. Consequently what is usually noticed are a number of green rosettes but no flowers, although if you look amongst and under other vegetation, you might discover a flower or two, although the actual flowering plants do not produce a basal rosette.

Quite a common orchid found in sheltered positions on stabilised alkaline tertiary dunes, particularly those with a southerly aspect. The flower (when found) is quite large, being around 50 mm (2") in depth. But more obviously, the colony is indicated by the leafy rosettes that can spread for several metres. Normal flowering period is June/July and early August.

Posted by William Archer at 6:28 PM