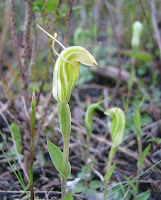 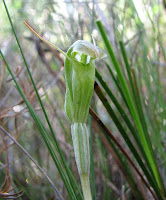 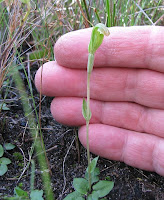 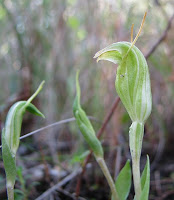 
This greenhood orchid is similar to the above species described by Hoffman and Brown in their book 'Orchids of south-west Australia,' but apparently since that publication the species nana has been deleted from WA orchids (see Update 23/12/08 below). So what this undescribed orchid is now called I am not sure, as this genus is in urgent need of revision. The WA Herbarium Flora-base Website list a number of undescribed Pterostylis species, of which the one called Pterostylis sp. Cape Arid may be the same, but not having the description I am unable to say.


Anyway, this orchid occurs in alkaline sands in sheltered southerly positions below steep (vegetated and stabilised) tertiary dunes. It has a basal rosette when flowering and occurs in compact small colonies during late July and August.

Update 23/12/08
Name changed to comply with species as detailed in the 'Orchids of Western Australia' by Andrew Brown et.al.