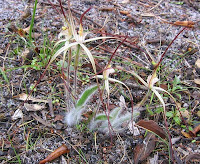 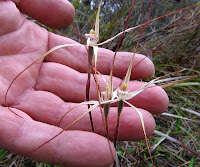 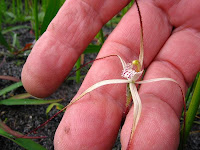 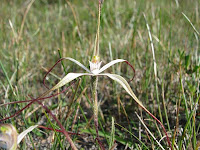 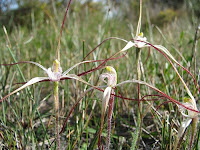 
A very variable small orchid, varying in size, coloration and stance. Being interested to confirm my identification I measured a number of specimens to get an idea as to where it resided re classification. In many instances the labellum width was slightly smaller than orchids at the lower range of C. vulgata (previously known as Caladenia varians subsp. varians), whereas it was slightly larger than a similar looking species Caladenia microchila. The leaf was in many instances smaller, particularly in width and as already mentioned, the sepal and petal length varied considerably and was often shorter than the described species. Color was an off-white to a pale cream.

I have been advised by those with greater insight into Orchidaceae than me, that we have an undescribed species here. Maybe they have a point, but I shall remain with the current classification that this species is a local variation of the Common Spider Orchid.

This orchid occurs as individuals or small groups in a widely spaced colony. It is quite common and can be found growing in low-lying heath areas (often around ephemeral swamps), but also on slightly elevated, flat, sandy locations where there is probably better moisture holding capacity. It is not found on dry sandy rises. Usual flowering time is from late July to early October.