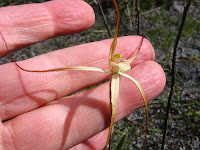 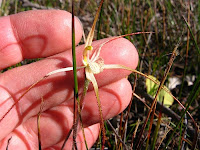 
Later flowering than most similar looking species, plus it has a wider labellum (at least 1 cm wide when flattened) and the flower is usually a rich cream color. The flowers also have long slender densely glandular filamentous tips to sepals and petals. The leaves are wider (4-7 mm) compared to other orchids in the Caladenia filamentosa group. To the east of Esperance, they are more common after fire but not widely distributed.

Posted by William Archer at 6:41 PM