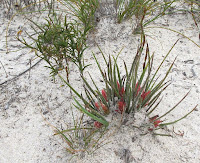 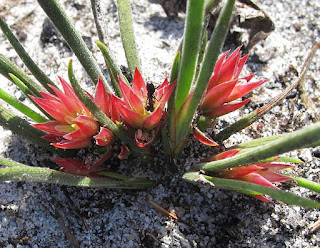 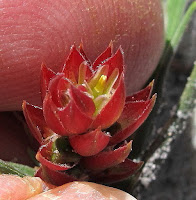 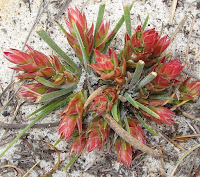 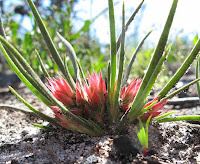 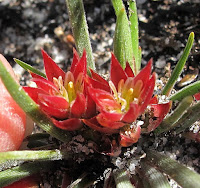 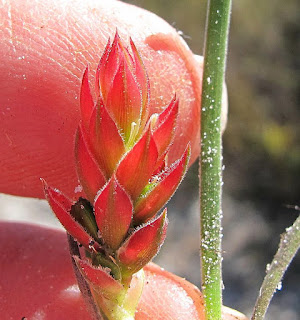 
Although the flowers of these plants are far from impressive, the surrounding pink/red bracts (hoods) certainly are. These mostly hide the lily structured white/green flowers and only provide a limited view when they partly open on mild sunny days. At this stage, small insects like ants will check them out for nectar and in so doing pollinate them.

The species name of acaulis means ‘without a stem,’ which is very descriptive of the floral heads. The plants favour deep sand and form a tussock that seldom exceeds 10 cm (4”) in height. They are common in near coastal, non-calcareous soils, in heath or open woodland from Cape Arid (140 km or 90 miles east of Esperance) to Perth.

Being such a small plant, it probably relies on regular low intensity fires that were distinctive of pre-European Aboriginal firestick management. Locally, is most frequently encountered on the upper slopes of large sandy hills, where the drier soils restrict the growth of normally taller shrubs that would otherwise crowd them out.

Johnsonia acaulis is the only species of this genus in the Esperance region, but in the wetter environment of the southwest, there are four others that have much longer flowering stems, where the variously coloured bracts form very attractive displays. Some are also used for cut flowers.

Johnsonia acaulis is a perennial, but is seldom noticed unless in flower and accompanied by the eye-catching bracts that are produced from August to December.


Johnsonia is part of the Hemerocallidaceae family, but has also been listed under Anthericaceae, Liliaceae and Xanthorrhoeaceae.