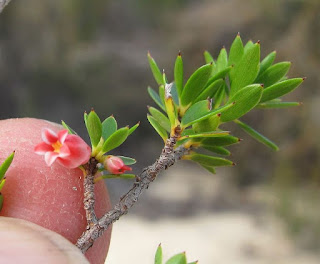 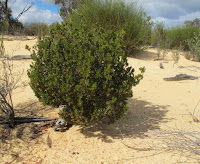 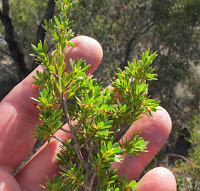 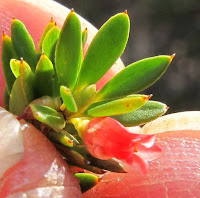 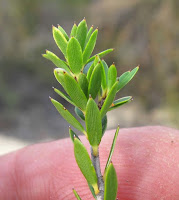 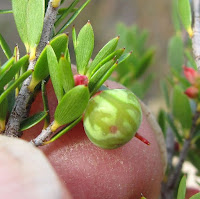 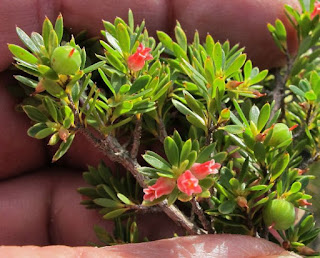 
According to the WA Herbarium, Brachyloma moolya is a tentative name, recognised only in manuscript form, having not as yet been published. Apparently, additional study is required to establish its individual status, or whether it is part of a more complex group. The details below are from the Lake Tay region, where common in deep yellow sand, especially on the upper slopes of large sand hills.

Brachyloma moolya is largely an inland species of mallee heath and open woodland, although also noted from the Cape Arid district and the Fitzgerald River National Park. Most records however are further north, from Gnowangerup to Hyden, then east to Lake Tay (around 140 km or 85 miles NW of Esperance).

It is a compact shrub to around ½ metre (20”) in height and is noticeably green in its dry habitat amongst shrubs of predominantly grey, silver or pale green. The pinkish red flowers although small (6 mm or ¼” in length), are plentiful and produced over a long period, as evidenced by the spent detached corollas (floral tube and petals) that litter the ground.

The leaves are of similar length to the flowers and densely cover the numerous branchlets to provide a dense background upon which the brightly coloured flowers are positioned like Christmas decorations. Continuing on the same ornamental Christmassy theme, the interestingly marked spherical fruits can also be numerous and due to the long flowering nature of this plant, often occur at the same time, although being green, require closer observation.

Flowers are produced at the growing tips of branchlets, and they will continue to be produced for as long as the plant grows, which depending on local weather conditions can be from June to November and possibly longer if conditions are mild and accompanied with decent rainfall.

Brachyloma is part of Ericaceae (Heath) Family, but may also be listed under Epacridaceae elsewhere.

My thanks to the WA Herbarium for identification.