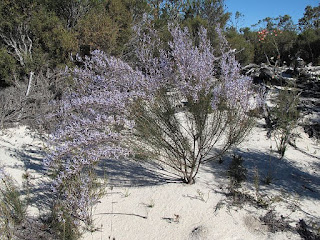 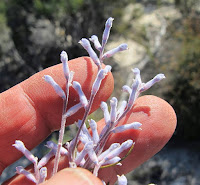 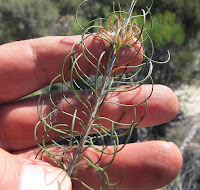 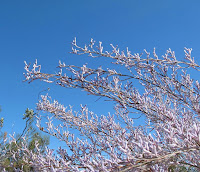 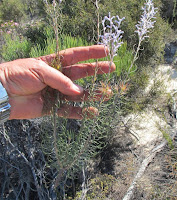 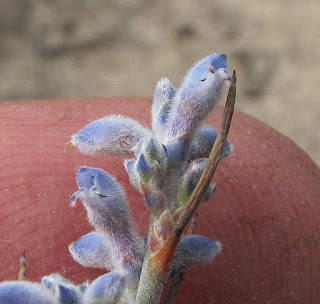 This species is more commonly found between Albany and Ravensthorpe and so normally outside my study area, but I encountered several plants in the Lake Tay region around 80 km NE of Ravensthorpe and 150 km NW of Esperance. They were a good match to the published description, except the leaves were up to 1.5 cm (5/8”) longer and the flowers were pinkish rather than white, except for the (described) blue apices.

By way of explanation, the enlarged flower photo above and taken in August (mature flowering period is from September to December), was from a juvenile plant where the flower spikes had not yet developed. Plants were to 90 cm (3’) in height and were growing in deep yellow sand as a component of mallee heath.

Conospermum floribundum is closely related to Conospermum distichum, which has a considerable distribution overlap west of Esperance. It however differs by the flowers having longer and more congested white hairs than C. floribundum, plus the upper blue lip is quite glabrous (without hair), as are the leaves. Visually, flowering shrubs of C. floribundum tend to be more open and spreading, whereas C. distichum are usually compact and resemble blue/white cushions.


Conospermum is part of the large and highly diverse Proteaceae family.