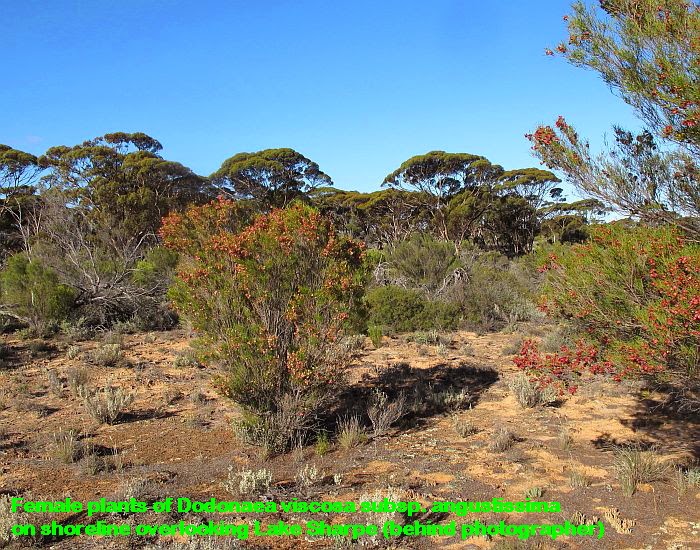 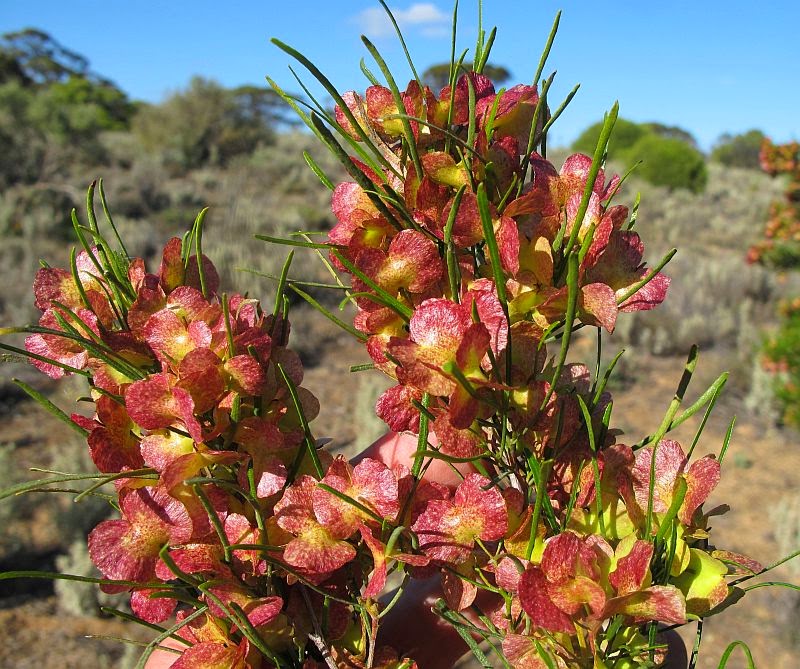 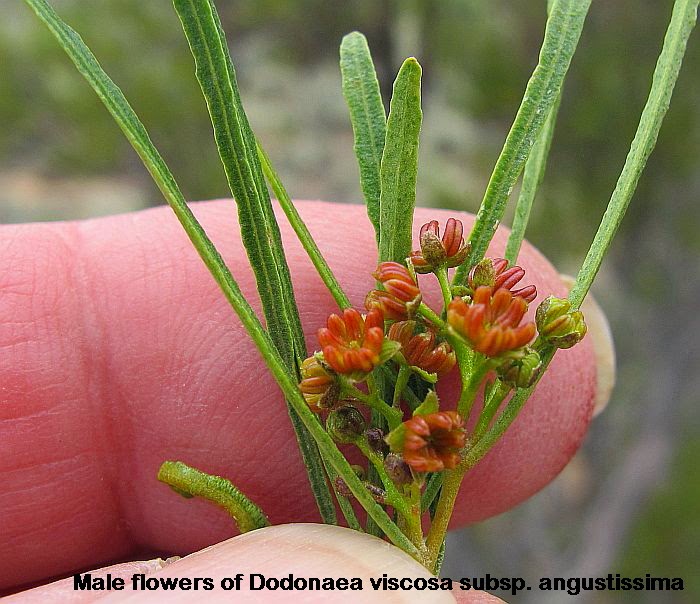 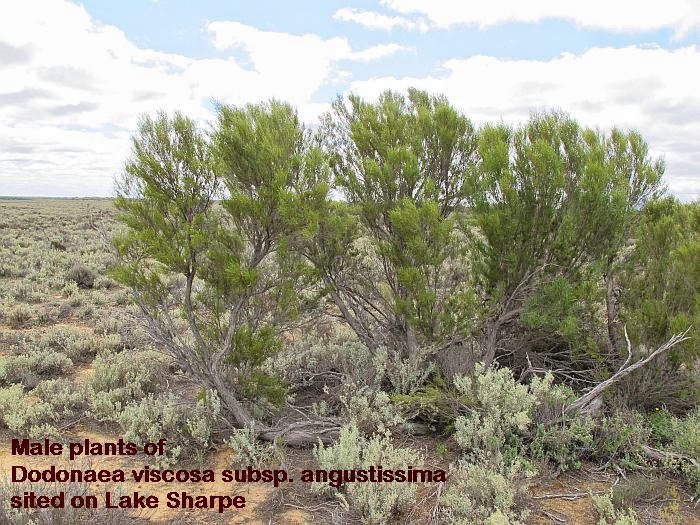 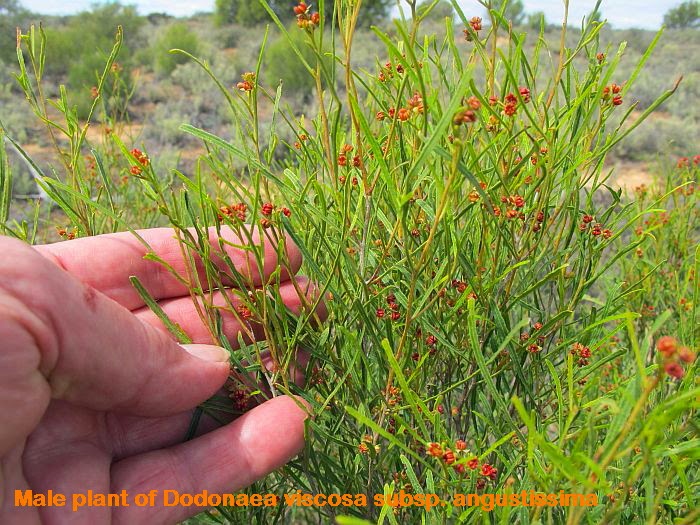 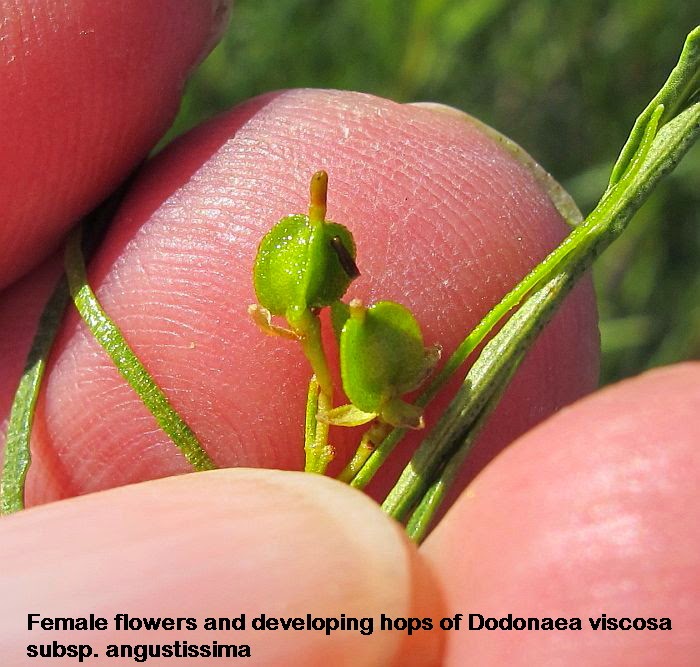 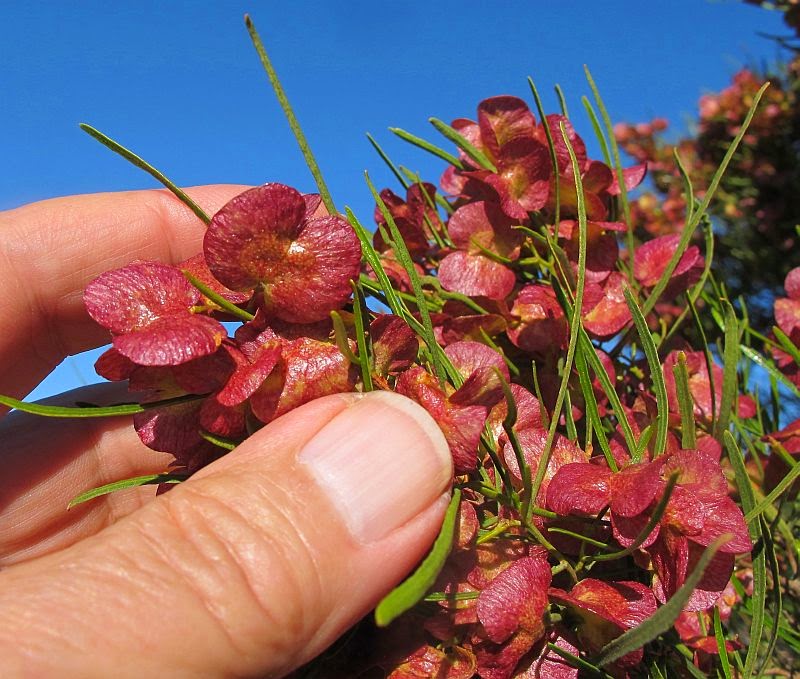 
Dodonaea viscosa and its 7 subspecies is extremely widespread, being found in all Australian States, NZ, PNG and islands in the Pacific and Indian Oceans. However subsp. angustissima is largely an inland species and is only found on the Australian mainland, where also common and widespread.

The seed of this plant germinates readily after fire or soil disturbance and has become a serious weed of pastoral areas of western NSW, although in the Esperance region it is not commonly encountered. Here it is mainly found on and around inland clay/gypsum saltlakes, where it exists in scattered small colonies, but elsewhere it is often found in much larger numbers and a variety of habitats.

The early settlers used the bitter hops for making beer, so it was probably introduced to areas where it did not naturally occur and due to its weedlike habit, soon became well established. The leaves are to some degree cyanogenic, so not readily eaten by stock, which meant it could also spread freely.

Dodonaea viscosa subsp. angustissima with its narrow leaves is very drought tolerant, which is another reason for its colonising ability in arid areas. However it is the leaf size and shape that largely determines the 7 subspecies, with generally the wider leaf forms occurring in wetter regions to make Dodonaea viscosa a highly variable and adaptable species.

In the Esperance region there is only one other subspecies that could be confused with subsp. angustissima and that is subsp. spatulata, which has leaves greater than 6 mm (1/4”) wide and are broader at the top than the bottom, plus they have a petiole (stalk). D. viscosa subsp. angustissima on the other hand has leaves that are less than 6 mm wide and mainly linear throughout, plus are sessile (without a petiole).

Locally D. viscosa subsp. angustissima can grow to 4-5 metres (15’) in height, but mostly they are around half that; the colourful hops are produced from October to December, but are likely to occur at almost anytime due to its extensive distribution and Australia’s variable climate.

There are all male and all female plants, with the male flowers having only a group of anthers that release pollen to the wind that by chance is carried to the females, although pollen collecting insects probably also play a part. Of the scattered colonies of this species, the composition of male and females plants is quite random, with some colonies being all male and others mostly female, which with their scattered distribution, probably stops it from becoming a weed as it does elsewhere.

Dodonaea is part of the Sapindaceae family.

Posted by William Archer at 2:38 PM