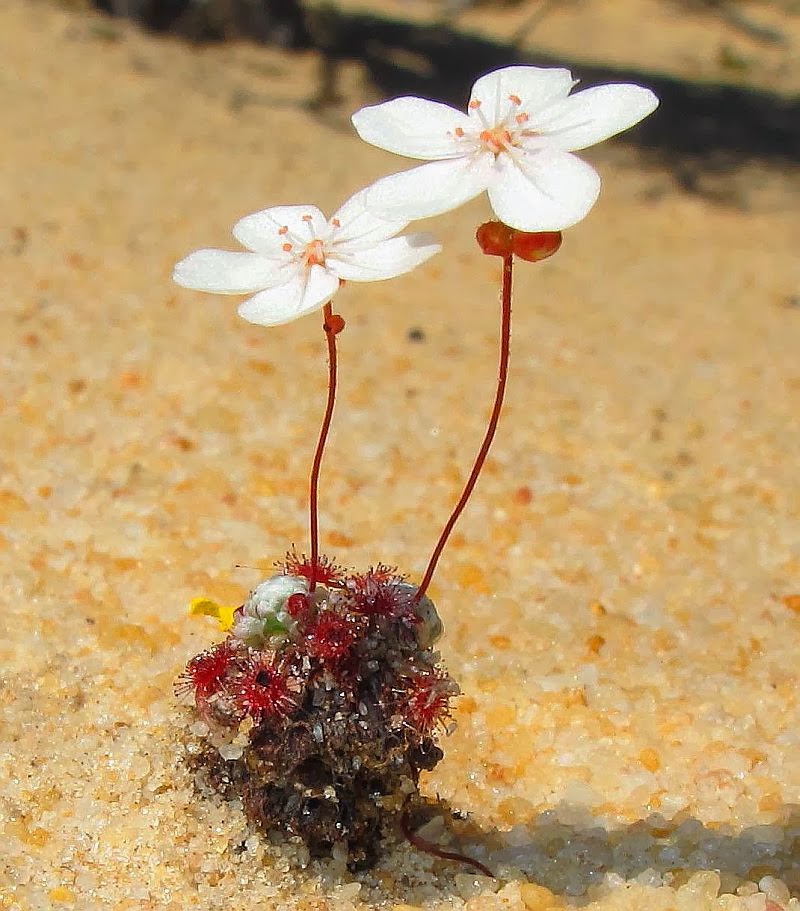 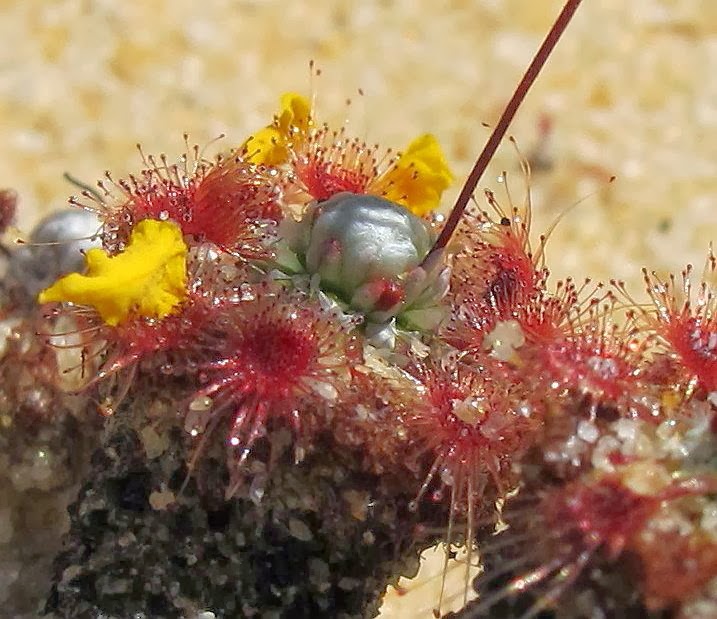 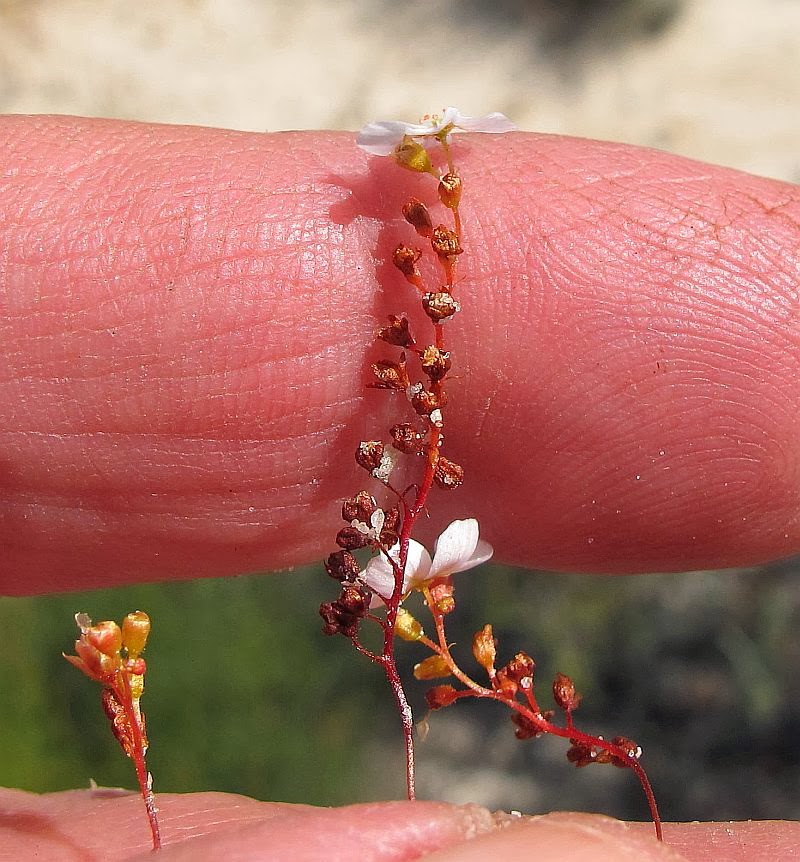 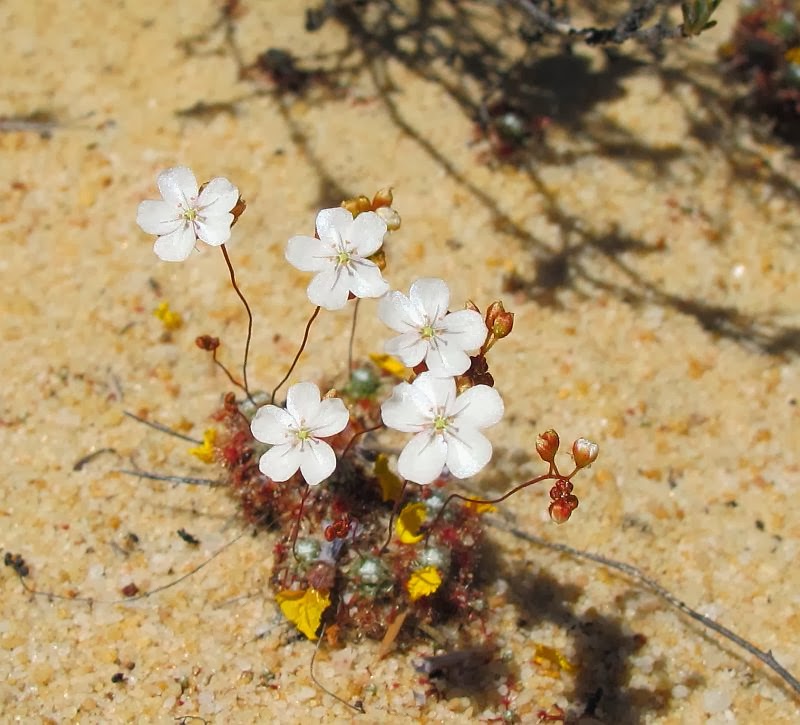 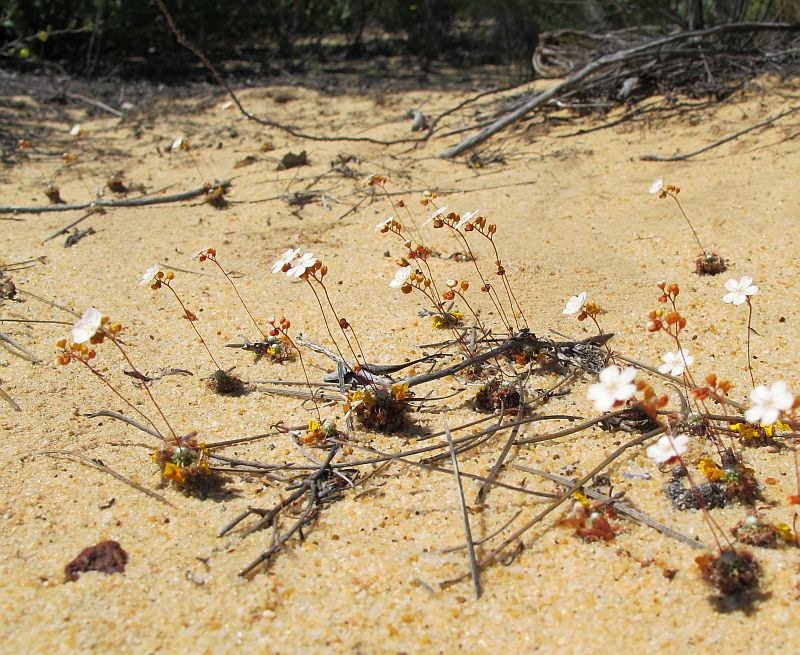 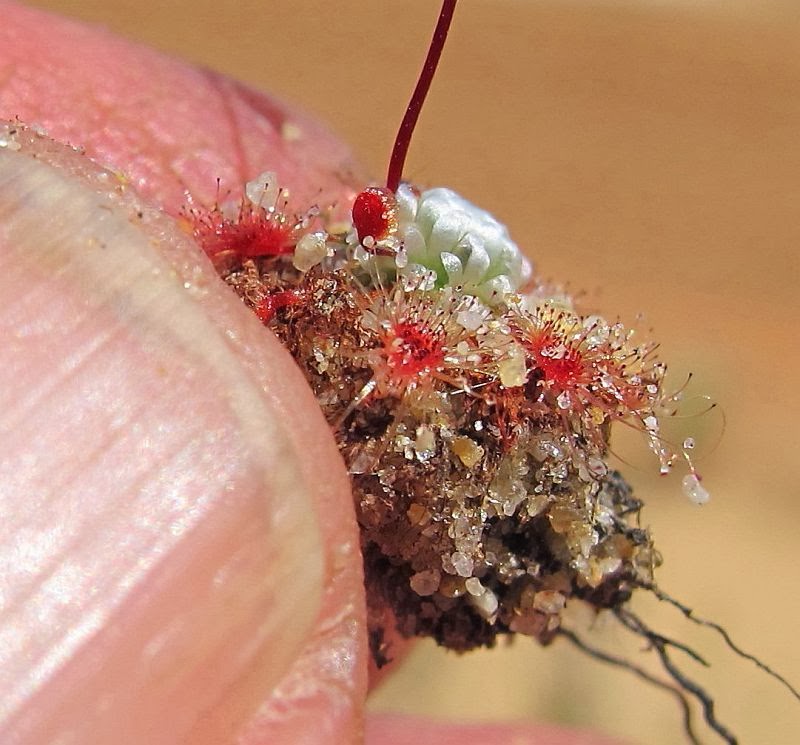 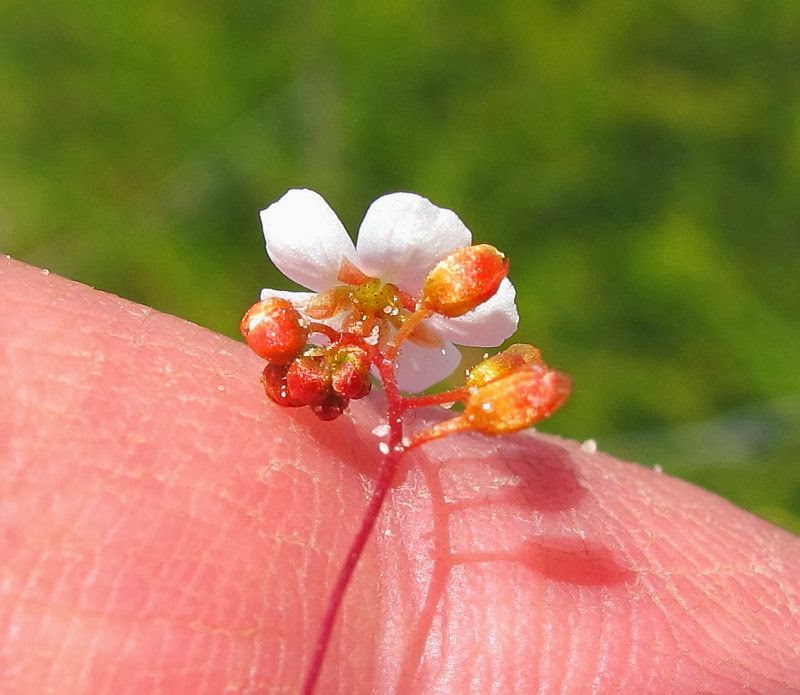 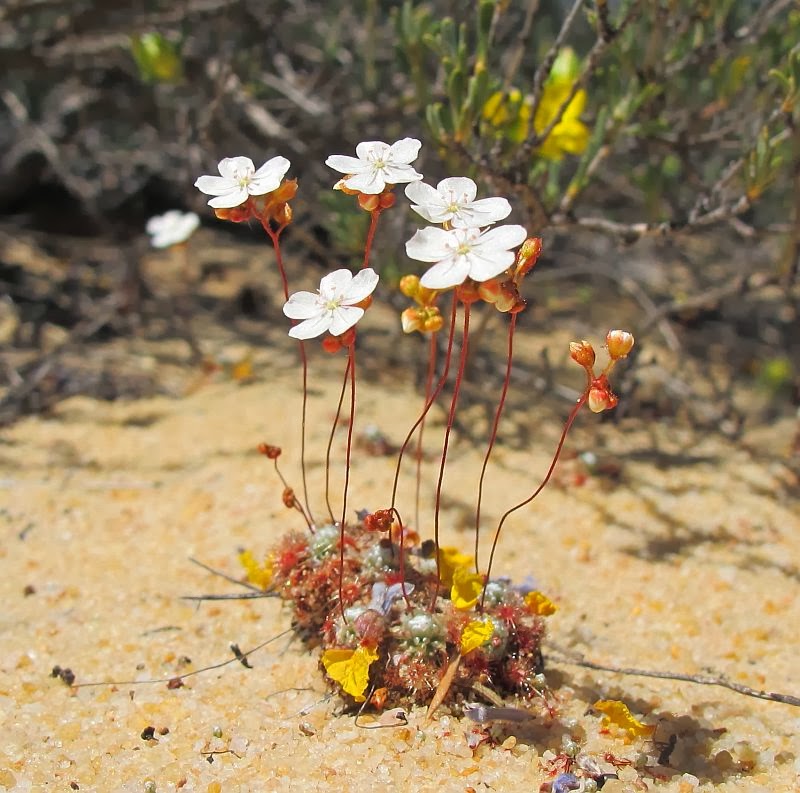 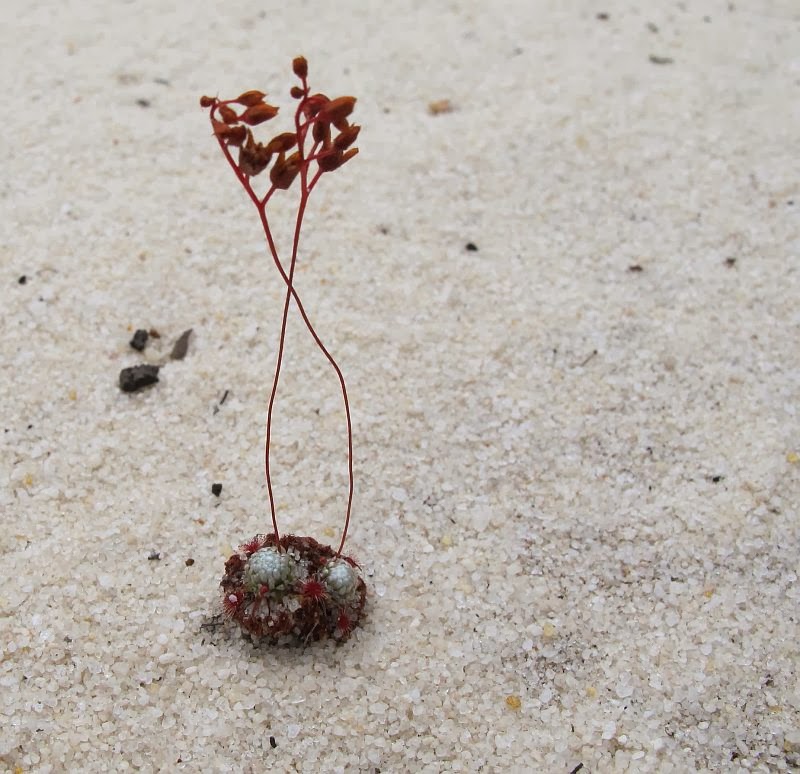 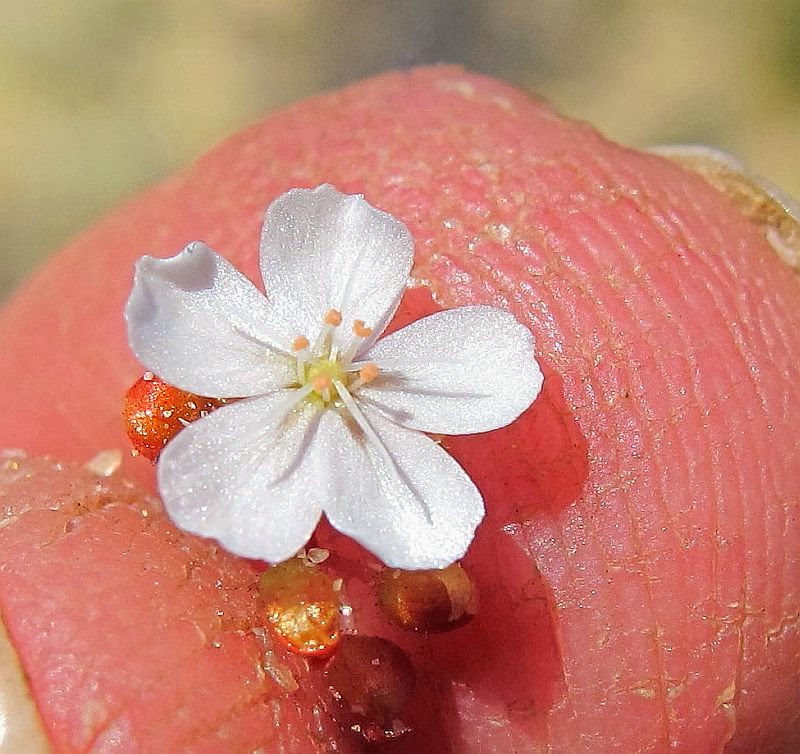 Drosera aff. pycnoblasta - Pearly Sundew
Knowing the considerable interest in carnivorous plants, I have included this species in order to bring attention to a variation of D. pycnoblasta. It differs from this species in several respects and may be more widespread than is currently known. Specimens have been submitted to the WA Herbarium who are confident its closet match is D. pycnoblasta than to any other species. It is currently known as Drosera aff. pycnoblasta and will probably remain that way until additional information comes to light.
Currently only known from deep white or yellow sand to the south of Lake Tay (140 km or 90 miles NW of Esperance), where common and widespread. It most notably differs from D. pycnoblasta by having five (not three) styles, plus the petals lack any coloured markings, also plants produce considerably more flowers (numbering to 30 per scape). However the stipules are entire (without any pronounced projections or indentations), which are similar to D. pycnoblasta and an important identification feature.
Plants grow to around 5 cm (2”) in height, with a basal rosette of around 1 cm (3/8”) diameter and have tiny circular leaves. The previous year’s growth is persistent, eventually forming a 1 cm high pedicle supporting more recent growth. Interestingly, this pedicle is formed by tightly packed small windblown grains of sand that probably provide insulation, plus act as a moisture trap for the fibrous root system, which is surprisingly shallow.
All foliage dies (although still retained) during summer, when temperatures in this region can exceed 40 degrees C (over 100 degrees F) in the shade, and considerably more in the sun. Flowering has been noticed from September to early December, although October/November would be the main period.
My thanks to the WA Herbarium for their identification assistance.
The Drosera genus is the major part of the Droseraceae family.

Posted by William Archer at 2:43 PM