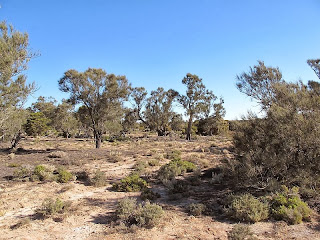 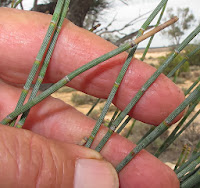 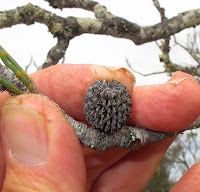 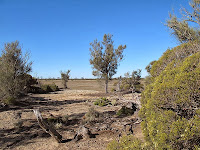 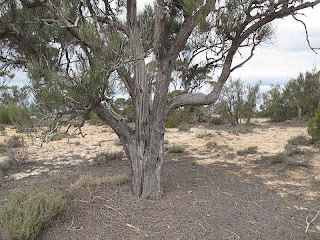 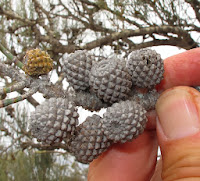 Casuarina obesa - Swamp Oak
The Swamp Oak is mainly an inland species extending almost to Newman (1100 km or 680 miles NE of Perth). It also occurs from Bremer Bay to the Kalbarri region, before turning southwards where coastal as far as Bunbury. However Casuarina obesa is a popular farm tree and no doubt some records are the result of these plantings. It is not officially recorded for the Esperance region, but can be found around a few saltlakes to the north of Esperance, although it is more common in a large gypsum/saltlake complex approximately 25 km (15 miles) NW of Mt Ragged (140 km or 85 miles NE of Esperance).
In the gypsum/saltlake complex, Casuarina obesa commonly grows in elevated and elongated gypsum mounds that can be 10 metres (over 30 ft) in height and a kilometre (over ½ mile) in length. These mounds are incredibly dry during summer where you sink to over your ankles in a white powdery gypsum material. They are also saline, alkaline and exposed to sweeping winds, so whatever grows here needs to be very well adapted to this harsh environment.
Often Casuarina obesa forms into a bush with multiple stems from which one takes over as the main trunk to then grow to 10 metres (over 30’) in height, but in the gypsum environment they are mostly shorter and would take many years to reach anywhere near that maximum height. As the gypsum mounds are sparsely populated with vegetation, wildfires are not normally an issue, although dead limbs and trunks are common to testify to the extreme habitat and how additional pressures from drought can severely affect them, yet they hang on and usually regrow when conditions improve.
The trees are either male or female, the latter producing a squat cone that is not much longer than wide. The valves of these fruits are much thinner than the closely related Allocasuarina spp. and when open can usually be moved backwards and forwards with little effort. The seeds are either straw coloured or grey, whereas seeds of Allocasuarina are reddish or dark brown. Another important identification feature with these plants is number of tiny leaf-teeth surrounding the green branchlets, which with this species are between 12 and 20.
I should add that Casuarina obesa grows in less extreme conditions elsewhere and would probably be faster growing and less physically stressed than in this environment. However, despite its problems in the gypsum/saltlake complex NE of Esperance, it is still a most impressive gnarled and weathered tree in this habitat.
The Casuarina genus is a lesser member of the Casuarinaceae family, with Allocasuarina being the larger.