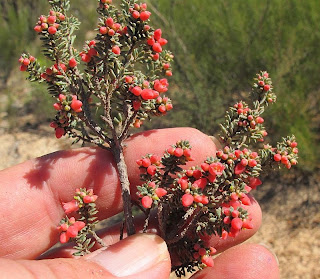 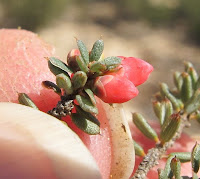 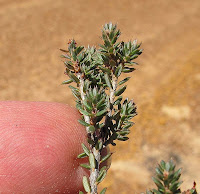 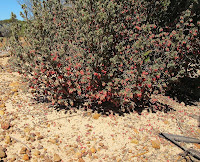 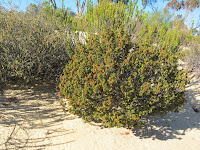 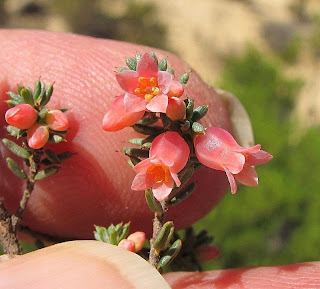 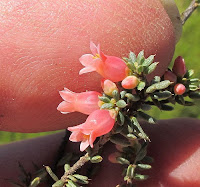 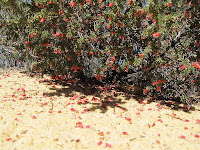 Brachyloma nguba – Blood-red Brachyloma
The Brachyloma genus is an Australian endemic of less than 20 species that are distributed in all States except the NT, most of them are located in WA but many await official publication. The species name of nguba is a local aboriginal word for blood and refers to the bright red flowers.
Brachyloma nguba is restricted to a small area NW of Esperance and notwithstanding several colonies being discovered since its published description in 1998, it still retains its initial Priority One Conservation Code rating. This means it is known from only a few locations and is in need of further survey to establish if it is an endangered taxon.
More recent discoveries from Munglinup 100 km (60 miles) west of Esperance and (north) to the Frank Hann National Park, now place this plant within large tracks of undeveloped land where although still seldom encountered, makes it more secure. I have located several small colonies, in the Lake Tay region where it favours shallow sand over gravel, or deeper yellow sand in close proximity to gravel.
Plants are quite compact growing to around 80 cm (32”) in height and are generally well spaced, giving a distribution profile of seed that is spread randomly via the droppings of birds. Also the eye-catching red tubular flowers are ideally suited for honeyeating birds, which are likely to be the pollinators.
Much further west and mostly near coastal areas between Albany and the north of Perth, there is a similar species called Brachyloma preissii. But this species has much larger leaves of 8-17 mm (5/16”-11/16”) in length, whereas those of Brachyloma nguba are only 2-3 mm (less than 1/8”) in length.
Flowering is recorded from April to May, but my observations also has it in full bloom during August and March, which suggests this species is opportunistic to unseasonal rainfall and will possibly flower whenever suitable conditions present.
The genus Brachyloma is contained within the Ericaceae family (formally Epacridaceae).
Reference:
Nuytsia Vol 12 (1998)
Brachyloma nguba (Epacridaceae), a new species from the south-west of Western Australia
by RJ Cranfield.

Posted by William Archer at 3:56 PM