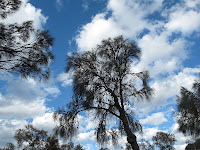 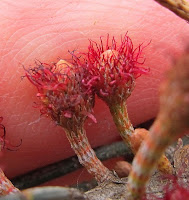 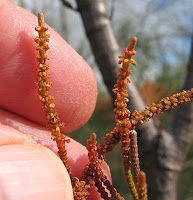 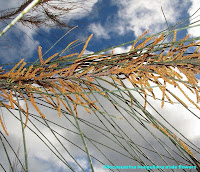 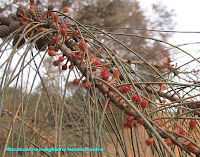 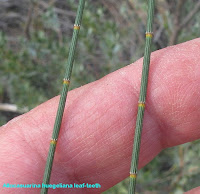 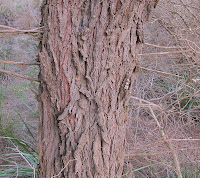 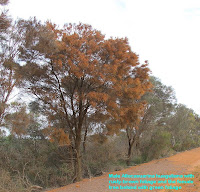 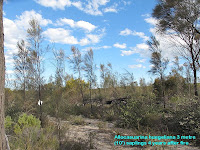 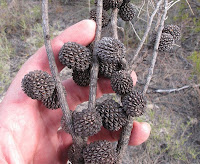 
This handsome small tree to 10-15 metres (35'-50’) in height is common and widespread around granite outcrops in WA, especially on the outer rim where soils are deeper. In these locations they form spreading compact colonies usually within 30 metres (100’) of the exposed rock. The compactness of these colonies is important as the plants are either male or female and being wind pollinated, need to be in close proximity to each other to ensure pollination.

Allocasuarina species only occur in Australia and number around 50 species, which not only include trees, but many shrubs too. In the closely related Casuarina genus there are less than 20 species, but these are more widespread and apart from Australia, are also found in India, Southeast Asia and many Pacific Islands.

The Allocasuarina differ from Casuarina by having dark brown seeds, whereas Casuarina are pale brown (straw-coloured) or grey. The cone valves on each side of the seed are also thick with Allocasuarina, but thin with Casuarina. With these genera, the main identification features are not so much the flowers, but the cone and seed structure, plus the leaf-teeth in spaced whorls along the green branchlets.

Spherical red flowers of the female Allocasuarina huegeliana trees develop into a multi-celled brown/grey cone to 2.5 cm (1”) in length and may be retained on the tree for several years. The rusty brown male flowers are arranged in catkins along the outermost branches to produce a colourful semi-weeping display when in bloom. The red coloured timber has a dense attractively marked grain and is regarded highly for turning and the manufacture of furniture.

The leaf-teeth are on the tiny toothed whorls (shown above), not the long green branchlets that look like slender leaves. With Allocasuarina huegeliana, there are either 8 or 9 leaf-teeth per whorl, but although other species may have a similar number, most will have either more or less. The other important identification feature with this species is the alternating and interlocking cone valves, plus the small tubercle at their base. Flowering and hence the attractive male foliage can occur from May to January, but the duration will depend upon local weather conditions.

The Allocasuarina genus represents the major portion of the Casuarinaceae family.