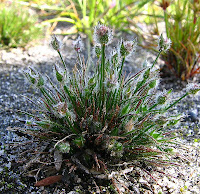 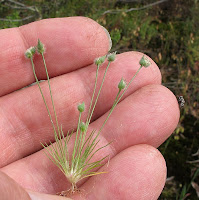 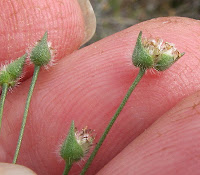 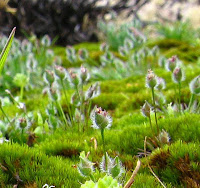 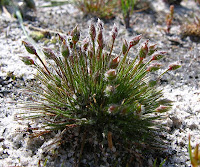 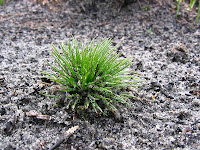 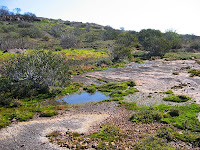 
These tiny plants are related to both sedges and grasses, they are very common across the lower half and far northern parts of Australia growing in damp seepage zones, often amongst mosses. There are a number of species (mostly annuals) in three genera and generally being small 5-10 mm (2”- 4”) in height, need habitats where environmental conditions exclude larger plants that would smoother them. The shallow soils over granite are an ideal habitat in this regard, but they can also be found in damp sandy soils in open situations with sparse ground cover.

Very often several species will be found growing together, but unlike grasses and sedges that often require microscopic examination to determine species, these plants are usually quite distinctive and easily separated. They belong to the Centrolepidaceae family, which is grouped with grasses (Poaceae) and most sedges (Cyperaceae) by having their flowers enclosed by glumes or glume-like segments (although some species have none), but importantly there is no conspicuous perianth (calyx and/or petal like arrangement).

Currently there are 40 Centrolepidaceae species distributed worldwide, but Australia has by far the majority, the others occurring mostly in neighbouring countries. Centrolepis currently has 29 species and is obviously the largest genus within the Centrolepidaceae family.

Centrolepis strigosa has two other subspecies, one (subsp. pulvinata) is only known from a few islands in Bass Strait, and the other (subsp. rupestris) from inland WA. Centrolepis strigosa subsp. strigosa is found from the Albany region to the western edge of the Nullarbor, to recommence in the eastern half of SA, extending into Queensland, NSW, Victoria and Tasmania. With such a widespread distribution, some limited overlap of subspecies can occur. To distinguish these, there are either none, or few hairs on the large green primary bracts (subtending the flowers) of subsp. pulvinata, whilst these same bracts with subsp. rupestris is considerably more hairy than subsp. strigosa.

Centrolepis strigosa is an annual and by commonly growing in exposed shallow soil habitats will only be found during the wetter months of the year, which locally can be from June to December, providing moist cool conditions prevail. Hot periods will quickly dry these fragile habitats and when this happens, the plants will disappear until the following year.

These are interesting although often overlooked little plants, but once noticed can make rambles over rocky ground all the more engaging.
Posted by William Archer at 4:43 PM