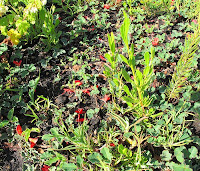 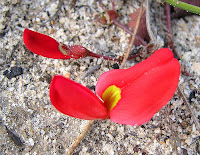 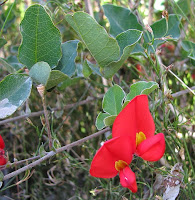 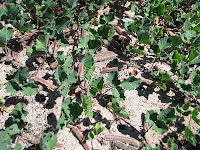 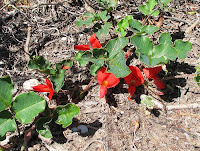 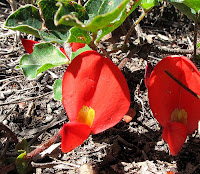 
This species is found in the southern Australian States of WA, SA, Victoria, Tasmania and NSW, where it is commonly known as the Running Postman or Scarlet Runner. In WA it happily grows in a variety of habitats from north of Kalbarri to Israelite Bay, but around Esperance it is most common on the stabilised tertiary calcareous dunes, where it twines on other low growing vegetation, or if space permits over the ground.

When prostrate, Kennedia prostrata can spread 5 or more metres, but this only occurs in sheltered moist hollows where there is a better soil structure; in the drier, light sandy areas it seldom exceeds 2-3 metres diameter. Birds are attracted to the flowers and would no doubt pollinate them, although various insects are also attracted, so it probably has multiple pollinators, as the prolific seed production would indicate.

In WA, flowering can occur anytime from April to November, although around Esperance they are most active during August and September. However if conditions are suitable (good rainfall coupled with warm sunny weather) they can produce flowers over a longer period.