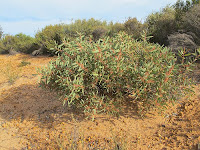 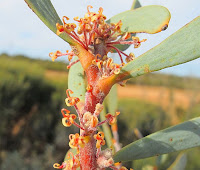 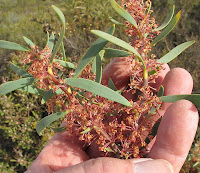 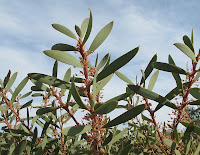 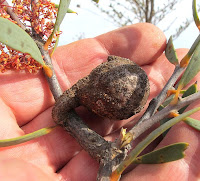 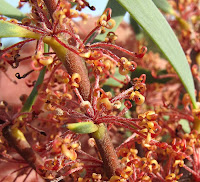 
This interesting small Hakea only just makes it into the Esperance region, with its currently known most easterly occurrence being around 130 km (80 miles) NW of Esperance, where it can be found in a sandy loam over gravel amongst mallee heath vegetation. Here it is well represented although not very widespread, but grows into a low spreading shrub of less than a metre (2’-3’) in height.

The botanical name of Hakea incrassata is due to its thick flat leathery leaves, which combined with a rigid point make handling difficult without getting severely pricked. The flowers although numerous and colourful plus close-up not unattractive, are relatively small and from a distance the branches appear to the cloaked in a strange peach coloured substance.

Although unusual for the Esperance region, this Hakea is common in similar habitat (plus over granite) from this area to north of Geraldton and west to Manjimup, where it can reach 1.5 metres (5’) in height. Despite the small flowers, surprisingly when pollinated (probably by insects), produces large woody ball shaped fruits to 3-4 cm (1.5”) diameter. Another unusual feature is the leaves twist up to 180 degrees from their base.

Flowering is recorded from June to November, but exactly when would very much depend on local weather conditions, with the warmer northern areas being amongst the first, whilst plants in the cooler southern districts more likely the last. Around Esperance, which is somewhere between, from July to September would be the best floral period.

The Hakea genus is part of the large Proteaceae family.