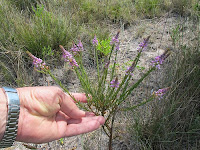 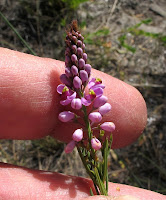 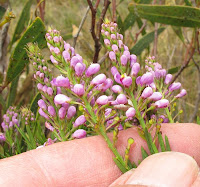 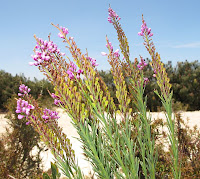 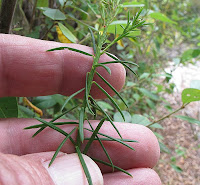 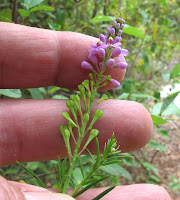 
The genus name of Comesperma refers to the tuft of hairs (coma) that are attached to the seed (sperma), which just so happens are similar in appearance to the shape of a comma (punctuation mark). These are attractive long flowering plants and bear some resemblance to pea-flowers by having large standard-like petals and a central keel petal, but they are not related.

An important feature with plants in this genus is the sepal arrangement (the lobes on the outside of the flower, which can be seen at the base of the coloured petals). Basically, if they are all free (unattached) from each other, although some may overlap, then these belong to one group, whilst another group has two of the sepals joined for most of their length. With Comesperma confertum the sepals are all free, which is important as it separates this species from another, although there are other differences.

The other similar species is Comesperma virgatum, which is often found growing in the same area as C. confertum, but besides the different sepal arrangement the leaves also differ, although appearing much the same from casual observation. With C. confertum the leaves are quite soft and the edges recurved, whilst the leaves of C. virgatum are thicker, flat and with a prominent vein below (the leaf keel).

Comesperma confertum grows to around a metre (3’) in height and unless tip pruned by browsing animals, is very upright and sparsely branched, whilst those that have, develop into a multi-branched shrub although still quite open. It is generally found in near-coastal environments from Kalbarri to Cape Arid, primarily in non-calcareous sandy soils, which can also overlie limestone or granite.

The flowers come in various shades of pink and even light purple, which are produced prolifically from September to December as the top of the flowering raceme continually grows, thereby producing more flowers providing there is also regular rainfall over the same period.