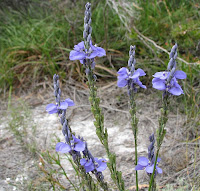 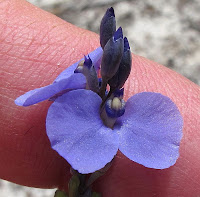 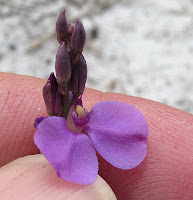 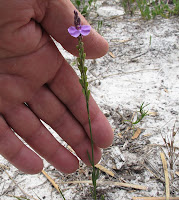 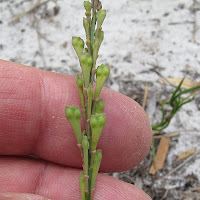 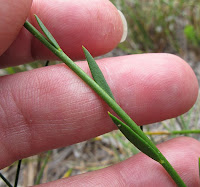 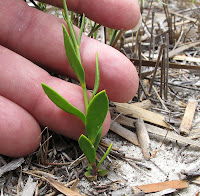 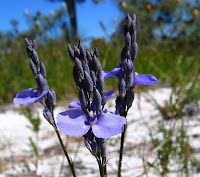 Comesperma calymega - Blue-spike Milkwort
A total of 32 species (one undescribed) in the Comesperma genus are found throughout Australia, of which 21 occur in Western Australia. They comprise a mixture of climbers, small shrubs and perennial herbs, the latter dying back to the rootstock during hot dry conditions, to grow again after good rainfall the following winter/early spring period. Comesperma calymega is one of the perennial herbs
The Blue-spike Milkwort occurs across southern Australia including SA, Victoria and Tasmania, whilst in WA it is found SW of a line between Cape Arid (100 km or 60 miles E of Esperance) and Kalbarri (500 km or 310 miles N of Perth). It usually grows to around 30 cm (12”) in height, although it can get a little taller. It has ovate leaves at the base and narrower ones further up the stem (in drier conditions the lower leaves may also be quite narrow).
This species produces an elongated raceme of brightly coloured flowers, which mature from the raceme base upwards. It is often the case that the flowers will bloom and produce seed capsules, but after additional rainfall will go on to produce another crop of flowers above the earlier ones (now gone to seed). So these plants depending on weather conditions, can flower over a number of months.
Generally, Comesperma species appreciate periodic bushfires and/or soil disturbance to reduce plant competition and enhance seed germination; even slashed bush tracks or firebreaks provide ideal growing conditions. Comesperma calymega favours deep non-calcareous sandy soils, commonly associated with heath plant communities. However it is surprisingly adaptable and can also be found on rocky outcrops and gravel soils, providing the habitat is well-drained but with some moisture holding ability.
The sepals (enclosing the flower) are not attached to each other (free) and the closed petals only just protrude above them (see close-up of light purple flower above). Also in the same photograph; besides the flower’s two large petals, the smaller central (keel) one is clearly three lobed. These flowers are mostly blue, but occasionally light purple forms are also encountered. Flowering depending on weather conditions occurs between August and January.
Locally there is only one other Comesperma species that could be confused with C. calymega, and that is Comesperma lanceolatum, but this is a much rarer species only found along the southcoast in deep non-calcareous sand on or near the summit of large sand hills. The most obvious difference between them is the flowers of this species are restricted to a compact terminal raceme and not an elongated one.
The genus name of Comesperma refers to most species having long hairs attached to the seed, giving them the appearance of a comma once released from the capsule. The hairs are held (as the seed matures) in the elongated capsule base (below the seed). Comesperma belongs to the Polygalaceae family.

Posted by William Archer at 6:53 PM