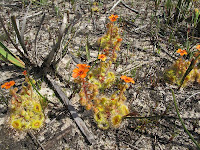 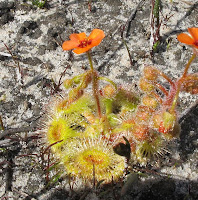 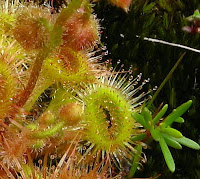 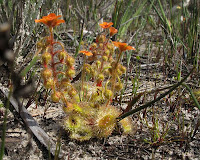 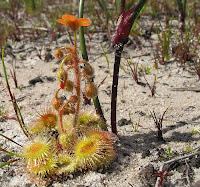 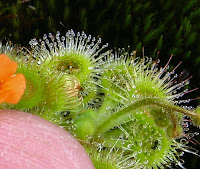 The Scarlet Sundew is also known as the Pimpernel Sundew and is widespread in the southern region of Western Australia, plus also distributed in SA, NSW, Vic and Tasmania, so is right across southern Australia preferring low-lying moist, but drained soils. However although common, to find them you usually need a bushfire or soil disturbance to remove larger vegetation, that will give these small fibrous-rooted, annual or (dependent on environment) perennial herbs, room to grow. In this regard they are ephemeral and similar to many orchids that will be around for a few years, then disappear until suitable conditions return.

With such a widespread distribution there are local variations, with some plants being more robust than others, plus flower colours differing from orange to red and even pink, although in WA they are mostly orange. There are also a number of other sundew species that could be confused with Drosera glanduligera, but like the species name suggests, this species is completely covered in glandular hairs with only the flowers being hairless, presumably not to interfere with the small flying insects that pollinate them. However these hairs are not insect trapping, but would reduce the mobility of any trespassing insect and make capture by the larger trapping leaf hairs easier.

The circular and deeply concaved leaves are attached to short flat stalks (petiole), which are arranged in compact rosettes of around 4 cm (1.5”) diameter. The flowers are located on 1-4 scapes (flowering stems) of approximately 5 cm (2”) in height, which can support a number of flowers that become pendant after they bloom. The flowers have only 3 (fine) styles, which are branched in their upper part to also make this Drosera species quite distinctive. In WA flowering can occur during August to November, providing daytime temperatures are not too hot and soils remain moist.