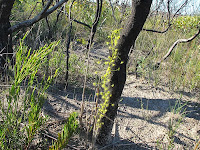 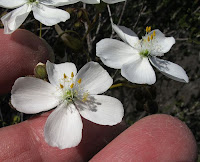 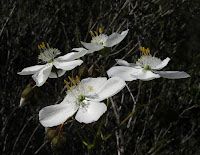 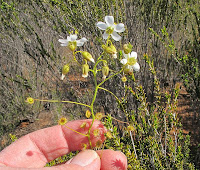 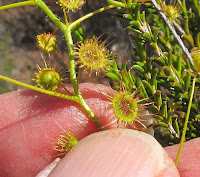 
This species would be one of the largest sundews, growing to 1.5 metres (5’) in height where it will rest against or climb on other plants for support. The flowers are also quite large being around 2.5 cm (1”) diameter and mostly white in color, but occasionally pink. It is a common species scattered in a variety of soils from Israelite Bay (near the Nullarbor) to Kalbarri 550 km (340 miles) north of Perth, plus extending inland to north of Kalgoorlie.

This sundew is another species with a tuber to which it dies back when conditions dry, but will resprout the following wet season. It is reasonably easy to identify by its robust nature, but the insect catching leaves (lamina) are in threes and individually quite circular. The stem is also glandular hairy, but only in the upper part of the plant, which largely separates it from the other subspecies (subsp. eremaea) that has glandular hairs over the entire stem, however is only known from the Mt. Magnet district.

The flowers are recorded from July to November, but being such a widespread species, flowering times will vary depending on local weather conditions. This species often grows in winter wet zones, especially inland rocky areas, where it will spring to life once temperatures begin to warm and pools start to dry. Closer to the coast with more regular rainfall, it is commonly found in deep sand, although mostly in or near low-lying areas, alternatively Drosera macrantha subsp. macrantha is also found growing in shallow sand over laterite (clay/gravel) soil, where moisture is also retained for longer periods.