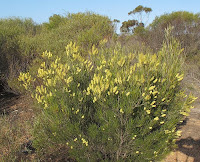 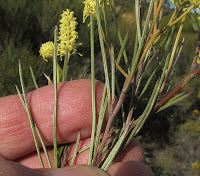 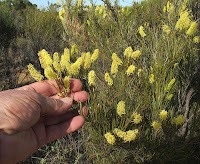 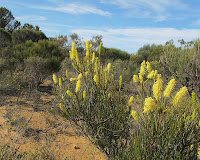 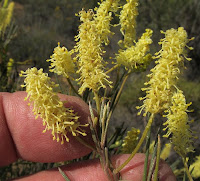 Although this Grevillea is very widespread in the lower arid region of Western Australia, being found to the north of Kalbarri, around Wiluna and east of Kalgoorlie, it only occurs to the NW of Esperance, with the closest colony around 100 km (over 60 miles) away. Here and further NW it favours low lying sandy loams over gravel, where it forms moderately compact colonies that cease once soils deepen and conditions become drier.

The foliage is rounded or slightly flattened and strongly ribbed in cross-section, which gives the initial impression they are tightly recurved. The cream to yellow flowers are mostly terminal and form single or more commonly twinned racemes to over 3 cm (11/4”) in length, a feature the plant is named after. Greek: didymos double, twin + botrys bunch of grapes, the latter referring to the flowers.

This Grevillea has two subspecies, the other being subsp. involuta that is localised to the inland Geraldton region and has obovate to elliptic leaves. Grevillea didymobotrya subsp. didymobotrya can grow to over 3 metres (10') in height, although local plants tend to be around half this size. Flowering time is highly variable, no doubt being very reliant on local weather conditions that favour moist conditions after rain. It is recorded as flowering anytime from June to January, but locally August to November would be more usual.