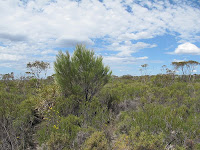 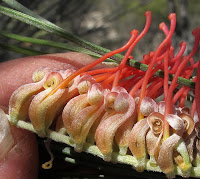 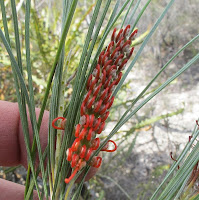 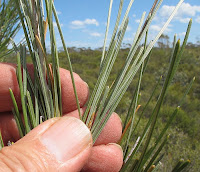 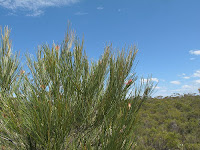 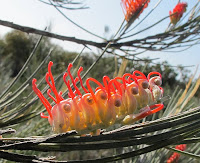 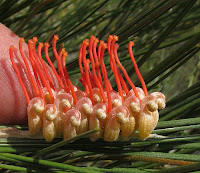 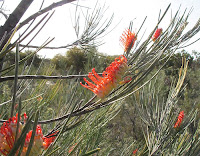 
Grevillea cagiana is a large bushy shrub commonly between 3-4 metres (10’-12’) in height, although it can reach 6 metres. The slender upright foliage is a silvery green to 12 cm (4”) in length and in the plants examined was undivided, although elsewhere they may be dissected. The Pink/cream toothbrush flowers with bright orange/red styles, extend from the tips of the upright branches and so are also angled upwards. This results in the styles facing towards the centre of the shrub and not upwards or outwards as most other species, but as the pollinating birds would be perched on the bare inner branches, the flowers are correctly positioned for them.

This Grevillea is mainly distributed in tall mallee heath from the NW and W of Esperance to the Bremer Range, then onto Merredin before turning NE to the Kalgoorlie/ Coolgardie region. It can be quite common in large colonies growing in deep sandy soils (sometimes over gravel), although plants tend to be widely spaced and in the colonies seen, did not form thickets.

The toothbrush flowers with their very bright styles plus slender foliage, immediately reminded me of the much smaller and more coastal Grevillea concinna (Red Combs), but Grevillea cagiana is unlikely to be confused with it, particularly as the similar toothbrush flowers of G. concinna are deflexed. Flowering time is highly variable and can be anytime from June to March, no doubt influenced by local weather conditions in this normally dry region.

Posted by William Archer at 5:17 PM