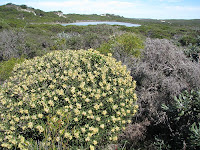 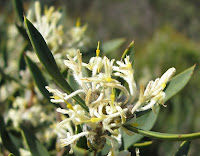 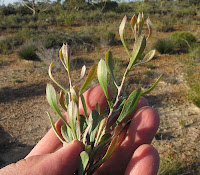 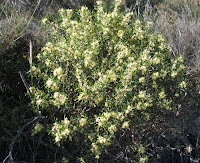 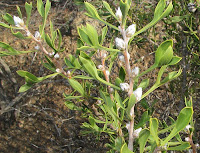 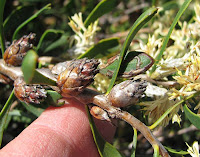 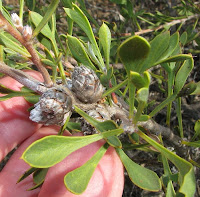 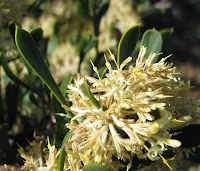 
The most obvious difference between this species and Petrophile squamata subsp. northern is the width of the leaves, being wider with subsp. Ravensthorpe. Another is the commonly undivided leaves that with some plants remain that way, but with others become toothed at the leaf summit and later divided, whereas the leaves of subsp. northern are almost always markedly divided.

With older identification keys, the undivided leaves and another feature (mentioned later) has meant Petrophile squamata subsp. Ravensthorpe has uncomfortably keyed to Petrophile heterophylla and many collections were probably lumped with this species. After a Petrophile genus review, P. heterophylla is no longer regarded as occurring in the Esperance district, although this determination has still left this puzzling subsp. Ravensthorpe.

Another confusing feature of this species are the cones, where freshly developed ones have a hairy exterior, but these hairs are deciduous and as the cone ages, completely drop from them. So you can imagine the confusion of the taxonomist, when they have plant specimens, most with undivided leaves, others toothed and still more divided, plus with hairy and totally glabrous cones (without hairs). The hairs on the leaves are also deciduous, further adding to the confusion.

Petrophile squamata subsp. Ravensthorpe is quite common to the west of Munglinup 100 km (over 60 miles) west of Esperance to Bremer Bay, where it often grows in shallow sandy soil over gravel or limestone, or directly on gravel soils. The very compact shrub above with the lake behind was within 100 metres/yards of the beach.

This shrub is quite a compact growing species to around a metre in height (3’- 4’) and produces tight clusters of cream flowers in the upper leaf axils, which are probably pollinated by insects. The flowers bloom with gusto from August to December, but wetter or drier conditions will determine the actual blooming period.

The other subspecies, Petrophile squamata subsp. northern, can be seen here