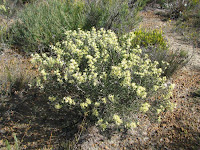 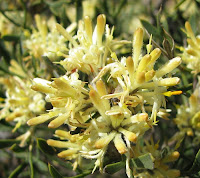 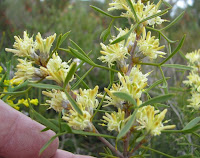 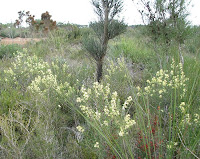 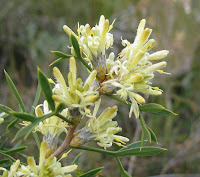 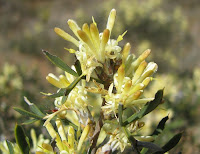 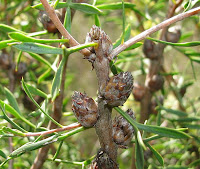 The Petrophile genus is very similar to plants of the genus Isopogon, but most notably differ in the seed containing cones, of which the former retains the cone-like appearance including outer scales, whereas the Isopogon cones quickly drop the scales to leave a much smoother conical nut.

This species is generally known as Petrophile squamata, because currently there are no classified subspecies, although it is accepted with this highly variable plant that at least two exist. It has also been known as Petrophile propinqua, but that name is no longer valid and is discontinued. Petrophile squamata subsp. northern (as officially recognised) is commonly distributed from Perth via the wheatbelt to Israelite Bay (east of Esperance), then back to Perth around near coastal environments.

Petrophile squamata subsp. Ravensthorpe is the other subspecies and is a compact bushy shrub of a much-reduced distribution on near coastal limestone and gravel either side of Ravensthorpe (west of Esperance). The most easterly colony I know is SW of Munglinup 100 km (60 miles) from Esperance, of which I shall feature in my next post.

Petrophile squamata subsp. northern is found on non-calcareous sandy loams, particularly over gravel or granite and within the Esperance region mostly within 50 km (30 miles) of the coast. This species is usually encountered as scattered small to medium sized colonies, but is commonly overlooked when not in flower, despite having interesting divided foliage.  However the foliage is slender and pale green, which blends into the many heath species with which it grows, but once the prolific cream flowers appear, it becomes difficult to ignore.

This subspecies is nowhere near as compact as the Ravensthorpe one, but locally is a more open shrub around a metre (3’-4’) in height, although recorded to 3 metres (10’) elsewhere. The flowers have been noted blooming from June to December, however around Esperance they tend to flower from August to November.

Details of Petrophile squamata subsp. Ravensthorpe can be seen here

Posted by William Archer at 3:53 PM