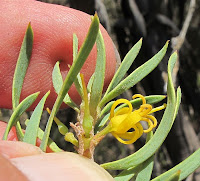 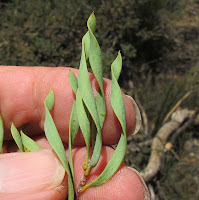 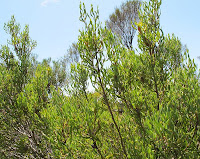 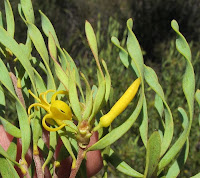 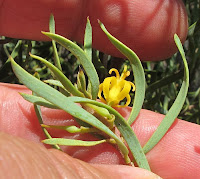 
It is not unusual for Persoonia plants to have a twist in their leaves, but P. helix is the most pronounced with up to 3 complete revolutions, although with some plants the leaves have fewer turns. The Spiral-leaf Geebung is an inland species from 50-400 km (30-250 miles) from the coast and is found from the NNW of Esperance to the Ravensthorpe district, then north to the Coolgardie region (west of Kalgoorlie). It is a moderately bushy shrub to around 2.5 metres (8’), but in the Esperance region it seldom exceeds 1.5 metres (5’).

Persoonia helix grows in mallee heath and is widespread in the Rollonds/West Point Roads district NW of Esperance, usually in scattered small colonies growing in deepish sandy soils over granite or gravel. The twisted leaves have a vertical growth and are grey/green, leathery and tough, but not sharply pointed. The bright yellow flowers can be highly fickle as to when they appear, probably being more reliable in years of regular rainfall which is seldom the case where they occur, but they are recorded in bloom from November to February.

Pollination of many Persoonias is from various species of native bee, which land on the flower and force their way down between the style and anthers (in this case, the upper recurved portion of the flower) to the nectaries at the base of the flower. As native bee species are not common in coastal areas around Esperance, this may help explain why most local Persoonias are more common inland.

Posted by William Archer at 1:41 PM