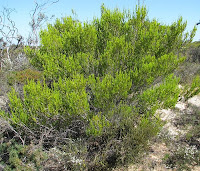 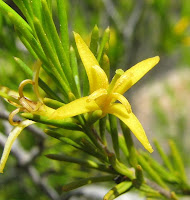 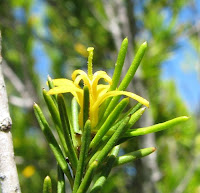 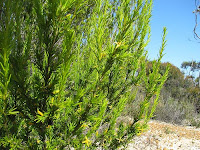 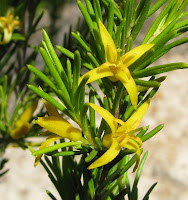 As the common name suggests, this species is mainly found in and around the Fitzgerald National Park to the south and southwest of Ravensthorpe, which is 175 km (110 miles) west of Esperance. It is also a near coastal species occurring within 50 km (30 miles) of the coast, where it grows into a bushy shrub of over 2 metres (7’-8’) in height. The photographed plant above represents a range extension, occurring around 45 km east of Ravensthorpe and a similar distance from the coast.

The Fitzgerald Persoonia above was growing in an open woodland in a sandy heath, with only a handful of widely spaced plants either side of the Oldfield River. Elsewhere it is recorded from gravel, clay and a stony loam, so obviously is quite adaptable to non-calcareous soils. Persoonia dillwynioides is similar in general appearance to Persoonia cymbifolia as both have slender concaved leaves although the former to 2 cm (3/4”) and up to twice that length with the latter. Persoonia cymbifolia also differs by being more of an inland species of over 50 km (30 miles) from the coast, and usually less than a metre (3’) in height.

The flowering period of Persoonia dillwynioides is recorded from November to January, but like many Persoonia spp. in these drier environments can be highly variable, even between neighbouring plants with one blooming early and the other late, so often repeated visits are required before they are caught in full flower.

My thanks to Dr Peter Weston for the identification of this species.

Posted by William Archer at 3:34 PM