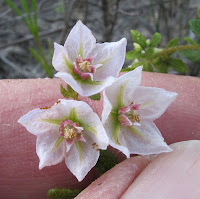 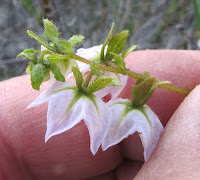 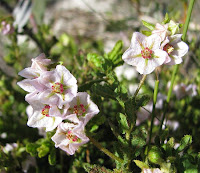 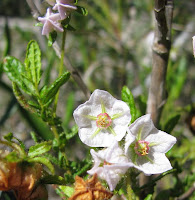 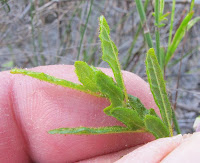 
The Thomasia genus is part of the Sterculiaceae family along with other notable genera like Brachychiton, Rulingia, Guichenotia, Lasiopetalum and others. Apart from Brachychiton, which is a tree, all others are shrubs, many with a conspicuous covering of stellate hairs (several hairs radiating star-like from a common centre). The genera are relatively straightforward to distinguish one from the other, but they can be very fiddly when trying to key out the species, due to similar shaped floral and foliage components, although they are obviously different in the field or if specimens of other species are available for comparison.

Thomasia cognata is very habitat specific, preferring the calcareous sands in stabilised near coastal dunes. Here particularly after bushfire, they can be common in hollows, flats and lower dune slopes. Along the south coast of WA there are few collection records, although in habitat they can be quite common. Probably most plant people do most of their botanising in non-calcareous soils a little inland, where flora diversity is much greater. Currently from very patchy collections, they are noted from Esperance around the coast to north of Perth.

This is a small compact shrub rarely exceeding 30 cm (12”) in height, but commonly spreading 60 cm (24”). Flowers are over 1 cm (1/2”) diameter and bloom (often consistently) from August to November.