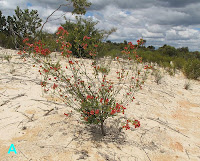 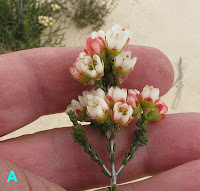 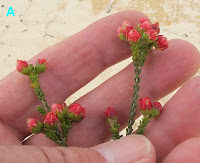 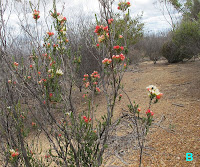 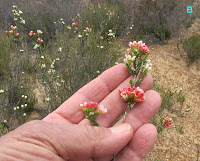 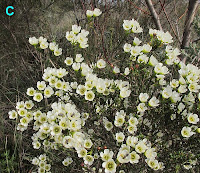 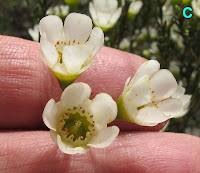 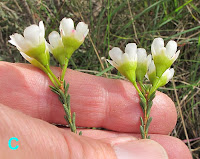 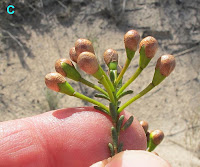 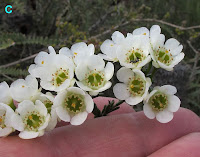 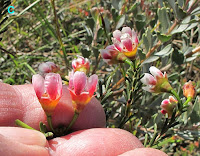 
Chamelaucium is a genus from the huge Myrtaceae family and contains the plants commonly known as Waxflowers, of which the popular Geraldton and Esperance Wax are two of the better-known species. Chamelaucium megalopetalum is not so well known, but is quite common between Israelite Bay (east of Esperance) to Bremer Bay (west of Esperance). It then gos north to Southern Cross (west of Coolgardie), so is also well adapted to inland conditions.

Chamelaucium megalopetalum is an upright shrub to around 1.5 metres (5’) and usually grows in colonies that are restricted to certain habitat type, which locally is often sandy hollows and flats, growing in a sandy loam over gravel. The Esperance Wax, Chamelaucium axillare is frequently found nearby, but in much deeper yellow sandy rises. This species can be confused with C. megalopetalum, as the both are similar sized shrubs, as are the flowers. However the foliage C. megalopetalum is very much smaller being less than a cm (3/8”) in length and the petals do not open wide like C. axillare, but adopt a more vertical position. (Chamelaucium axillare is detailed here and the link to it can be located in the lower right-hand column).

The flowers of both Chamelaucium megalopetalum and Chamelaucium axillare initially open white, but age to red, via pink and sometimes orange, although with C. megalopetalum this transition tends to be more direct from white to red. Flowering is recorded from May to December, but this is highly variable particularly with those growing inland where rainfall is less reliable. Locally August to December would be more usual.

Above I have lettered the photos in three groups, A B and C. Those labelled C are typical of Chamelaucium megalopetalum and conform to the description above. Those labelled A and B are either an inland form found to the NE of Esperance, or an undescribed species. One undescribed species for this region does exist and is called Chamelaucium sp. Mt Heywood, although no details are currently available, but may represent the A and B plants above.

Plants A were seen approximately 90 km (55 miles) NE of Esperance, which is several kilometres/miles to the north of Mt Heywood growing in a deep fine sand/clay loam. Plants B were encountered around 45 km (28 miles) to the WSW of colony A, growing in a gravel soil over granite. These plants notably differ from Plants C by the flowers being smaller, as are the leaves, so too are the flower stalks (pedicels). The sepals are strongly ciliate with plants A and B, but smooth edged with plant C. The floral bracteoles are deciduous with plants C, but retained on A and B plants.