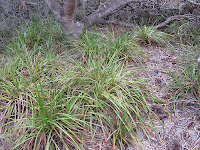 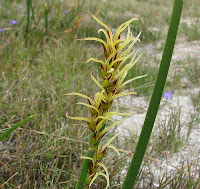 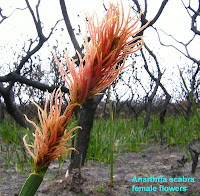 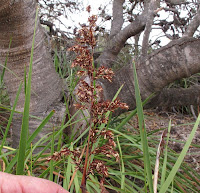 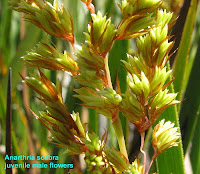 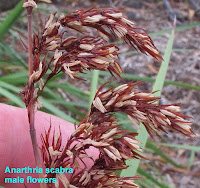 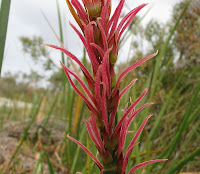 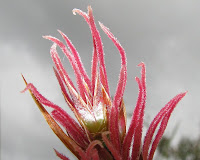 
There are only 6 Australian species in the Anarthriaceae family, all endemic to southern WA and all occur in the Esperance region. The Anarthria genus was included in the sedge family Restionaceae and is still regarded a member by some authorities, but the WA Herbarium has adopted a revised classification system that places it in Anarthriaceae. Anarthria scabra is probably the most ornamental species of the group and if with long stems, may have application in the cutflower market. This species when not in flower is frequently misidentified as a Lomandra (Mat Rush), particularly by Eastern States visitors as its general appearence resembles common plants there.

In the Esperance region Anarthria scabra is especially common in near coastal heathland, favouring deep non-calcareous sandy soils, usually growing in large dense colonies on gently sloping sandy hillsides. There are male and female plants, with males dominating, which is to be expected with wind-pollinated species. Locally, plants grow to around 60 cm (2’) or so in height, but elsewhere are recorded reaching twice that size. The leaves arch to 180 degrees and with others form a green layer of vegetation above the ground to provide excellent sheltered habitat for many small animals of all description below.

The male flowers are soft and weeping, beginning yellowish, but quickly changing to chocolate brown. The female flowers are often very colourful, being pink, red, orange or yellow, although some are a semi-transparent pale yellow and less ornamental. Flowering occurs from August to December, with male plants being the first and last to bloom.

Posted by William Archer at 6:23 PM