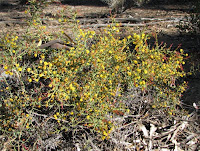 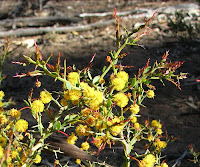 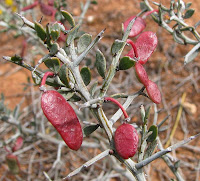 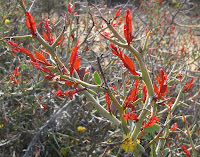 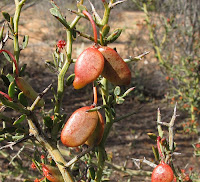 
The wattles being legumes (seeds developing within a pod) are now in many circles including WA, allocated to the Fabaceae family, which combined with the peaflowers and others, make this a very large grouping of plants. Acacia erinacea is as its name suggests very prickly, although not viciously so when compared with other species. Nevertheless, it is not a plant you can easily remove a specimen, but will rarely draw blood on casual encounter.

The Hedgehog Wattle is very widespread in Western Australia, particularly in the sandy/clay loams over limestone that are common to the inland mallee region, plus it occurs periodically across the Nullarbor to the SW corner of South Australia. With its dry inland preference, Acacia erinacea arches to the north of Esperance, extending to the north of Kalgoorlie, then west to the Geraldton region before heading SSE to the north of Albany. Typically, the average annual rainfall in this district is between 20-40 cm (8”-16”).

With such a wide distribution, differences within the species will occur, but locally in the mallee region, this plant is mostly under a metre (2’) in height and tends to form a shallow dome shape, emphasised by the arching habit of the spiny branches. It has the usual deep yellow flowers of many acacias, but it is the other parts that make the local form most appealing, as all new growth is bright red. This applies to flowers in bud, phyllodes and branches and even the pods. They will revert to conventional colours as they age, but the shrub often has this multi-coloured manifestation that can last for many months.

Flowering is recorded from June to November, but naturally ranging over such a large inland region, this will be dependent on local weather conditions. It is not uncommon to have both new flowers and maturing pods on the same plant at the same time, reflecting its opportunistic nature as it takes advantage of any passing storm before the onset of summer. It is an interesting looking species and worth keeping in mind during the second half of the year.

Posted by William Archer at 7:44 PM