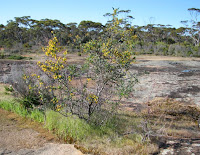 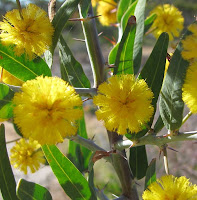 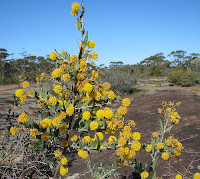 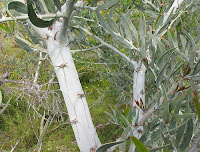 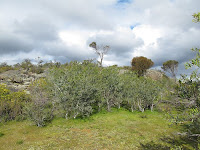 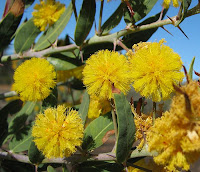 
In its natural habitat, this wattle is an attractive shrub growing 3-4 metres (10’) in height with silver/green foliage and large buttercup yellow flowers. However it is armed with the most vicious thorns, which are long, rigid and very sharp, ready to draw blood at slightest contact. I had one of these plants self-seed next to my house and as I needed a little shade at that spot I left it there, well it grew to 2 metres (6’) the first year and almost doubled that the second, but instead of being the sparsely branched and open shrub it normally is, it thickened up to be as wide as it was high.

The little birds loved this acacia and some even nested in it as the thorns afforded marvellous protection against predators, but after 4 years I began to worry as pruning back its ever expanding habit, meant using thick gloves and long handled secateurs and even then it was not without danger. So after 5 years I got the tractor with its front end loader and pushed it over and dragged it to where I could burn it, I also removed as much of the root I could see, plus cleaned-up of all the little thorny bits, which took a very long time. However, after a couple on months it started spouting from buried root pieces, these I dug out, as I did with others over the following twelve months. So please take my word, this is a very big no, no, plant for anyone’s garden, it may look nice, but it belongs to the devil.

In the bush this shrub is not a problem, and in the Esperance region it is restricted to those granite outcrops in the mallee with a 20-40 cm (8”-16”) average annual rainfall. It extends further inland to near Kalgoorlie approximately 400 km (250 miles) north of Esperance. In the granite environment, its roots penetrate into the cracks where it will dominate for considerable periods, sending up new shoots as old ones die, or are burnt in a bushfire. This marginal habitat can quickly change from wet to dry and back again, depending on passing storms, but regardless of the harshness, Acacia dempsteri rarely succumbs thereby illustrating its outback toughness. Surrounding soils to these scattered granite outcrops are usually a fine sand/clay loam over limestone, conditions this acacia does not seem to like, so they remain contained.

Despite its devilish habit, Acacia dempsteri is quite eye-catching when in flower with large bright yellow balls to 2 cm (3/4”) diameter, which are shown to advantage by its contrasting grey/green foliage and white powdery trunk. Acacia dempsteri most regularly flowers during September and October, but blossom can also be found at other times after rain.