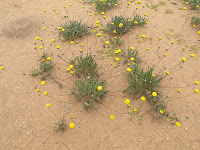 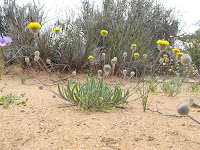 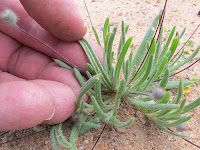 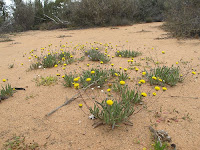 
Asteridea belongs to the huge Asteraceae family that are commonly known as Daisy Flowers, but some may know them from Compositae, although the former is gaining greater acceptance. Even the Asteridea genus is newly (1980) adopted, having previously been known as Athrixia. These name changes are not uncommon with such a large worldwide family and the varying opinions of many taxonomists.

Asteridea athrixioides is a pretty brightly coloured yellow daisy that is also known as ‘Wirewort’ because of the wire-like flower stems (wort, an old English name for plant). It is mostly an inland species being found over 500 km (300 miles) from the coast, although locally it can be seen to the North and NE of Esperance, around saltlakes and low granite outcrops, generally in the heavier sandy loams.

The composite flowers are made up of many small tubular florets, which are held tightly together by numerous thin hairy bracts. The 2-4 pappus bristles (the fluffy parts of dandelion flowers that float on the wind) have long plumose hairs only on their ends, probably requiring a strong wind to carry them any distance, but as suitable habitat is usually not very widespread, there is probably little need.

The flowers are around 1.5 cm (½”) diameter and are recorded from July to November, but in this extensive dry inland environment, rainfall would very much determine their occurrence and around Esperance, between August and October being more likely.

Posted by William Archer at 4:48 PM