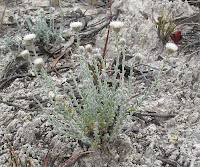 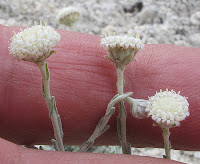 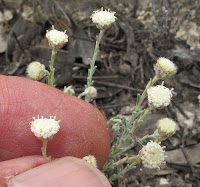 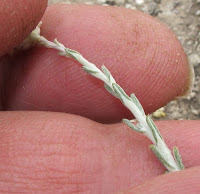 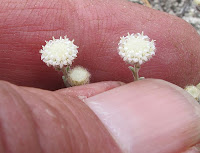 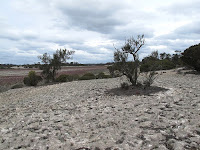 
Asteridea is part of the giant worldwide Asteraceae (daisy) family, but Asteridea archeri is known only from a gypsum/saltlake complex 145 km (90 miles) NE of Esperance. Here scattered on extensive samphire flats (plant community of succulent salt-tolerant plants), are island-like mounds of gypsum to 10 metres (over 30’) in height,  comprised of a very fine powdered gypsum soil, on which this small daisy makes its home. When you walk on these mounds, you sink to your ankles and leave footprints that last for many months until the gypsum slowly expands to leave a smaller depression. However, wildhorses commonly pass through this area and can make quite a mess.

In this very harsh, windswept, low rainfall environment and incredibly dry powdery soil, the sub-shrub Asteridea archeri, grows in colonies mostly on the eastern and southerly slopes. One of the photos above shows the environment, with the small dark tufts being the daisy. It grows to 150 mm (6") in height and apart from the flowers is covered in fine woolly hairs, which probably provides insulation from high summer temperatures, plus creates a more favourable micro environment. As very few other plant species survive here, it is good testament to its effectiveness.

The flowers are white and neatly arranged into compact heads. However, the time they flower is highly dependent on rainfall and varies considerably from June to October and probably either side of these months if conditions are suitable. Since the discovery of this daisy in 1990, gypsum-mining has commenced on one of these mounds.  At this stage the plants are not endangered as mining activities are limited, but if conditions change and extraction increases, the habitat of this species will be severely compromised.

Posted by William Archer at 4:45 PM