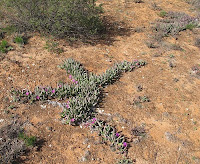 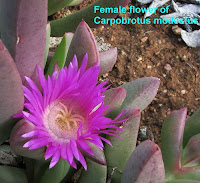 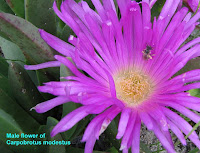 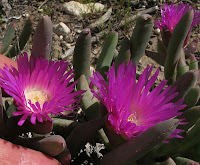 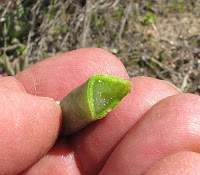 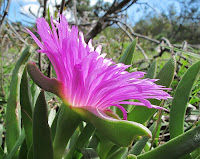 
Carpobrotus is a member of the Aizoaceae family and contains a number of succulent species including the Round-leaved Pigface, Disphyma crassifolium, which as its common name suggests has round fleshy leaves. The Carpobrotus species all have triangular succulent leaves, although with some the corners can be quite obtuse.

The photographs above currently represent Carpobrotus modestus, although this plant is extremely diverse and probably includes several species. They are found in a variety of habitats from near coastal calcareous sands to non-calcareous heavy loams on granite outcrops, fine sand/clay over limestone (mallee zone), around saltlakes and a host of other soil types in very different habitats. The flower size varies from 2-4 cm (1”-2”) diameter and the foliage can be pale green to blue/grey, plus the leaf corners sharp or almost rounded. Growth too varies from single extended trailing prostrate stems, to a vigorous intertwined form.

Carpobrotus has been recorded as only producing bisexual flowers, but this is incorrect as very often they are unisexual, or predominantly male flowers with one or two female ones. The gender of these plants can be recognised from a distance as male and female flowers differ in size, with female ones being much smaller. There is obviously a considerable gap in our knowledge of these plants and an opportunity exists for someone to make a substantial botanical contribution.

Flowering commonly occurs August to November, but odd flowers are often produced at other times.