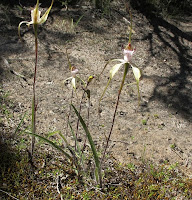 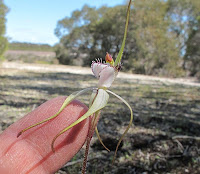 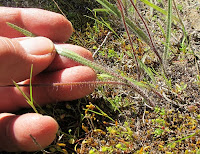 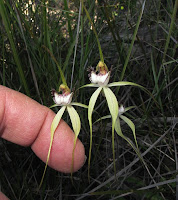 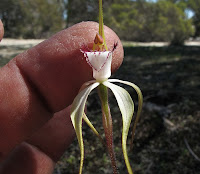 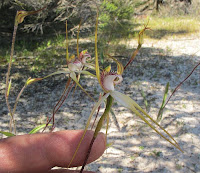 
This Spider Orchid is mainly found around the large saltlake conglomeration 75 km (45 miles) North and NE of Esperance, where it grows in a fine sand/clay loam around the playa lakes. The preferred habitat from the ones observed is on gentle slopes 50 to 100 metres/yards from the open saltlake zone. A couple of small groups were seen about 30 metres away, but these were exceptions. Also they were growing in well-drained open ground, or under tall Melaleuca and mallee Eucalyptus, where ground cover was sparse. However all Caladenia cruscula orchids were sheltered from the normally windy open lake environment behind at least one row of bushy 4-5 metre (12’-15’) tall shrubs and/or mallee eucalypts.

Caladenia cruscula is very similar in appearance to Caladenia longicauda subsp. rigidula, which also grows in the region, but around granite outcrops and inland mallee winter-wet environments. So besides different habitats, they also differ in the length of the lateral sepals and petals that are shorter with C. cruscula, being to 4 and 5 cm (nearly 2”) in length, whereas C. longicauda subsp. rigidula are a good 1 cm (1/2”) longer. Possibly due to their shorter length, the sepals and petals are also quite stiff and less flexible. However the most dissimilar features are centred on the labellum, with C. cruscula being shorter in length with less calli past the bend, plus the vertical fringe is shorter. And last but not least, the reverse side of the leaf is mottled red in the lower portion. These variations can be viewed as a direct comparison in the Caladenia longicauda subsp. rigidula post (see lower right-hand column).

Around the larger saltlakes of the Truslove Road district, this orchid is reasonably common and quite widespread, occurring as single individuals or small groups in extended colonies. However they appear to be very habitat specific, which may reflect the drainage pattern of these areas, where rainfall slowly seeps down the slope on a probable clay or limestone substrate. Flowering is recorded from August to October.