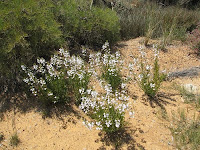 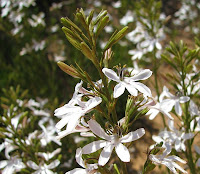 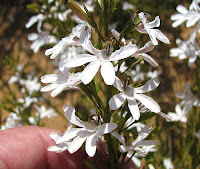 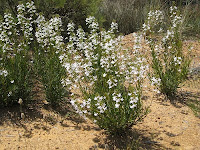 Goodenia scapigera subsp. scapigera is a widespread shrub around Esperance, also extending to Albany and further inland, whilst the other subspecies (subsp. graniticola) grows even further west. The subsp. scapigera looks very similar to Goodenia decursiva (a previous post, see right-hand column), but the White Goodenia mainly grows in sand and gravel based soils, particularly along roadsides thus reflecting its liking for disturbed areas and bushfires. Its leaves are less toothed, longer and more slender (4-6 cm x less than 1 cm wide) or (over 2” long x around ¼” wide) than Goodenia decursiva, with the apex wider or sides reasonably parallel.

Generally occurring in scattered colonies and seldom exceeding a metre (3’) in height, it grows quite quickly, but usually has a shorter lifespan than Goodenia decursiva, although setting seed and reproducing with little effort. Many plants in the large Goodeniaceae family have this quick growth and seed setting ability and are consequently often the first to colonise after destructive events.

The flowers are to 2 cm (3/4”) diameter and produce over a fair period of time, depending on the length of the flower spike (usually shorter than Goodenia decursiva), nevertheless they display well, helped considerably by a greater number of flowering stems. The White Goodenia normally flowers between September and January, although prolonged dry weather can alter times significantly.