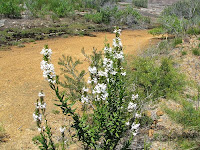 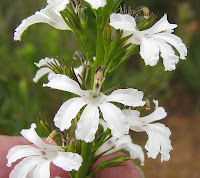 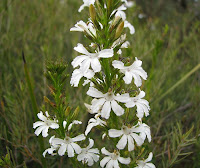 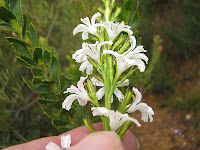 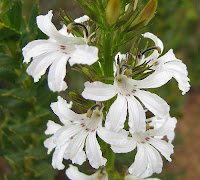 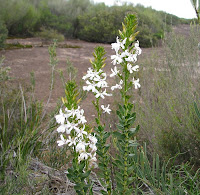 
Goodenia decursiva is a handsome shrub to 1.5 metres (5’) with toothed, compact, deep green foliage and long terminal clusters of white fan flowers, each to around 2 cm (3/4”) diameter. It was also known as Goodenia scapigera var. foliosa, which according to the Flora of Australia has now been incorporated into this species. Goodenia decursiva strongly favours granite outcrops, where it can often be found growing around the base or in deep soil pockets, particularly to the east of the town. In this habitat it extends inland to near mallee outcrops and to the Israelite Bay region (175 km or 110 miles away). Shrubs are usually open with several near vertical but heavily leaved stems and when in full flower can appear like a giant posy.

This is a long flowering shrub and depending on seasonal rainfall will bloom anytime from September to January, often relying on additional water run-off from the granite. Goodenia decursiva does at times occur along gravel roadsides, but the similar looking species Goodenia scapigera subsp. scapigera is more likely to be found there, but this species although having similar flowers has longer thinner leaves that are less congested along the stems.