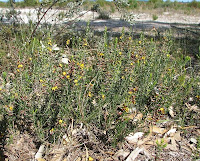 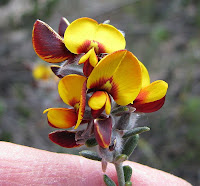 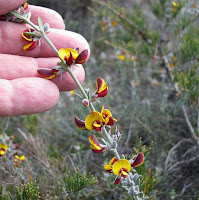 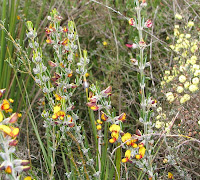 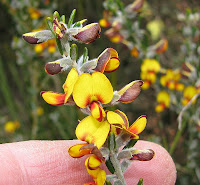 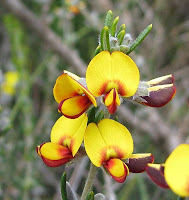 A very common shrub in the Esperance district, favouring non-calcareous sandy areas, particularly when over gravel, or on gravel itself. Nowhere common, but turns up often and is most noticeable when in flower, otherwise blending imperceptibly into surrounding vegetation. Like most pea-flowers, they do very well after bushfire when competition from other species is reduced, plus their hard-coated seed is cracked open by the fire, permitting moisture to enter and germination to begin.

The name of pseudoprocumbens is most apt; as it is a low shrub, often with stems spreading near the ground, but suddenly turning up to form an open shrub with many sparsely branching, vertical flowering branches. If space is available, the vertical tips can be less than 15 cm (6”), or if hemmed in, can reach close to a metre (3’) in height.

Despite Aotus pseudoprocumbens being well known in the Esperance district, it was only described in 2005 by J A Chappill along with a number of other Pea Flowers. Unfortunately she died before her revision of several genera could be completed and published, but her manuscript with descriptions of 60 species is widely distributed and fully recognised in botanical circles. However, there will be many including myself who have tried without success and much frustration to key out this common species, so it is hoped her work will be completed and made more available in the foreseeable future.

Aotus pseudoprocumbens usually flowers locally from August to October, and occasionally (depending on weather conditions) during July. Pollination is most likely by insects, such as the small blue butterflies that are very common and seem to visit most blossom, although other invertebrate species would also be involved.