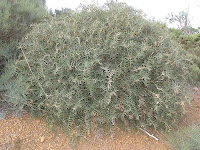 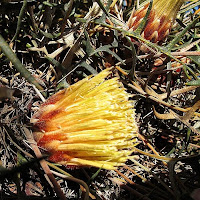 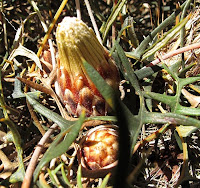 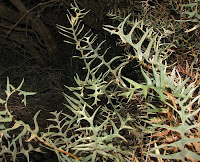 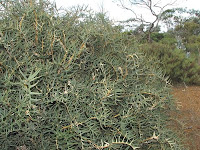 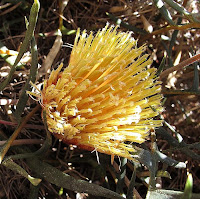 
The Tangled Honeypot was previously known as Dryandra pteridifolia and close to Esperance it occurs in shallow sand over gravel, or directly on gravel mainly along roadsides 20-30 km (15 miles) from the coast. Not uncommon to the NE of the town along Scadden Road, and NW between Lort and Young Rivers particularly along Beltana and Neds Corner Roads. It is also known from the Cape Le Grand area. Banksia pteridifolia subsp. pteridifolia is the only subspecies in the Esperance region.

It lives up to its common name of Tangled Honeypot as the stiffly arching, deeply toothed 35 cm (14") long leaves grow into each other to form dense grey/green domes to 80 cm (2'8") in height by 1.2 metre (4') diameter. The honeypot flowers are often buried deeply within this tangled vegetation and completely hidden from view, so how the pollinators (other than honey and pygmy possums) could get to them is a wonder. Birds would only be able to reach the flowers when the plants were young and the blossoms reasonably exposed.

Banksia pteridifolia subsp. pteridifolia has a lignotuber, permitting it to quickly regrow after bushfires from its root-system, whilst most other species require mass seed germination to perpetuate itself. This lignotuber feature would permit the Tangled Honeypot to be less dependant on seed, so limited pollination by birds in its early years may be sufficient, as only a few new plants produced this way would ensure its long-term survival.

The Tangled Honeypot is recorded flowering from March to May, which seems to correspond with most plants examined, yet the one photographed above was flowering in November and would probably do so for at least another month. These odd flowering times are not unusual in areas of limited and varying rainfall, when many plants become very opportunistic and will take advantage of unusual seasons or habitat variation. So it is worth examining, particularly with Proteaceae, plants in different habitats as flowering out of season frequently occur.