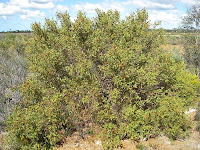 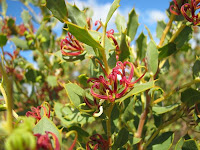 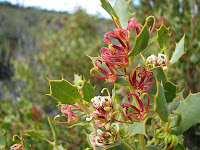 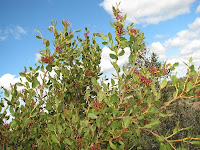 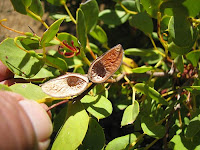 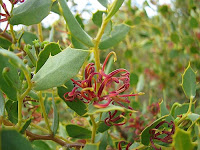 A spreading bushy shrub from 11/2 to 3 metres in height with red/purple flowers, although often cream when immature. It is commonly encountered in gravel or sand over gravel 40 km (25 miles) NE of Esperance, and to the south of Mt Burdett, then scattered to the north of Salvation Boat Harbour (140 km or 90 miles NW of Esperance), which is on the edge of my designated Esperance region, however Hakea denticulata is recorded in many localities further west.

The preferred habitat of this hakea, tend to place it at conflict with wheat growing and quarrying activities that have probably cut deeply into its natural distribution, although still locally widespread in gravel soils. These areas are shrubby mallee heath regions, stopping short of the limestone substrate 'true mallee' zone and often have a very diverse Proteaceae floral accompaniment.

The fruits are smooth on the outside, or sometimes with a few blunt spines, however unlike most hakeas that retain their seed in tightly enclosed woody fruits, these open to release theirs annually, which then fall from the shrub, making the operation of locating them very uncomfortable due to the short sharp spines of the leaves.

The not unattractive red flowers that bloom between July and October, have a mild fetid odour, so perhaps not a plant you would wish for your garden, but may indicate an interesting method of pollination. Initially my thoughts were that this hakea was attracting both birds (via the red flowers) and insects (via the fetid odour), but on closer inspection it is probably more interesting.

I suspect the pollinators of this hakea are insects and probably flies. The flowers consist of the style and four spreading red perianth segments and if you look closely at the inside of those segments, a dark mucus substance is coating the surfaces. This is similar to fly attracting fungi that also produce a fetid odor via this means, thereby encouraging flies to walk over the fruiting body and in the process accidentally pick up sticky spores to aid the species distribution. In the case of this hakea, instead of spores they would be picking up sticky pollen grains to be transferred to other flowers to enable pollination.